BARRE, MA (USA) -- Nestled in the woods of this small town, 96 young adults recently gathered at a quiet mansion for a weeklong sojourn, away from buzzing cellphones, humming iPods, and the myriad callings of human and cyber civilizations. 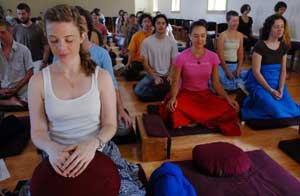 Keeping even the most basic forms of communication, like speaking and writing, to a minimum, they meditated in silence, practicing vipassana, or insight meditation, an ancient Buddhist technique that involves focusing one’s attention on the present, on the breath, mind, and body.

“It was just meditate, eat, sleep,’’ said Kestrel Slocombe, 19, a student at Vermont’s Bennington College who spends much of her time rushing to class, worrying about a novel she’s writing, and painstakingly planning her days, sometimes weeks in advance.

“It was almost like being a child, she said. “You didn’t have to put together a puzzle of a complicated day.’’

At a time when homework or job pressures and the likes of Facebook and Twitter compete for attention throughout the day, meditation groups say an increasing number of young adults are signing up for retreats and classes, seeking a temporary escape, a haven to reconnect with their thoughts.

“Young people are much more stressed out than people 20, 30 years ago,’’ said Rebecca Bradshaw, one of the retreat leaders who also works as a psychotherapist. “We have a fast-paced and alienating culture.’’

Since the Insight Meditation Society, a Buddhist nonprofit, introduced the retreat specifically for 18- to 32-year-olds in 2004, the number of young adults attending to practice vipassana has steadily risen, said Bob Agoglia, the organization’s executive director.

This year’s retreat attracted more applicants than ever from 16 states, he said, and for the first time the group had to turn away more than a dozen applicants.

Harvard’s Humanist Chaplaincy, a community for agnostics, atheists, and the nonreligious, started a free, open-to-all group this year that practices different forms of meditation, including Buddhist and Quaker, said Zachary Alexander, 26, the group’s founder. Half of its nearly 30 members are under 32, he said.

“It’s something that people find can be a break from their stressful lives,’’ said Alexander, who considers himself an atheist.

“It can be something that leads to personal insight.’’

While traditional Quaker meditation emphasizes hearing divine messages, the humanist meditators focus on impulses toward love and truth, and try to accept the events of their lives to gain greater inner calm, said Alexander, a lab administrator at the Harvard Center for Brain Science.

“No one’s asking me to profess anything or asking me to call myself Buddhist,’’ said Beckmann, a public health researcher at Boston University who was raised Catholic. “I really appreciate the opportunity to explore.’’

The benefits of meditation, supported by scientific research, might attract younger populations, according to Sara Lazar, a neuroscientist at the Massachusetts General Hospital who conducts meditation research.

Lazar said her team recently studied the brains of about 30 adults - some as young as 18 - before and after they underwent an eight-week insight meditation course.

The results showed that in most participants, the portion of the brain that responds to fear, anger, and stress - the amygdala - became smaller. In animals, the amygdala has been shown to get larger in stressful situations, Lazar said.

About a year ago, the Center for Health Promotion and Wellness at MIT Medical began offering stress-reduction classes that incorporate meditation, said Lauren Mayhew, a program manager at the center.

“A lot of people have a hard time going from their frenetic lives to sitting still,’’ Mayhew said, noting that the classes, discounted for students, tend to fill up on the first day.

“That’s when students wake up and realize that they are mortal beings and that their bodies are affected by stress.’’

Some are drawn to meditation out of sheer curiosity about how their lives might change both during and after meditation.

Angela Borges, 26, a doctoral candidate in counseling psychology at Boston College, turned to insight meditation about two months ago, though she was skeptical of its tangible benefits.

Many have told her she looks much happier, she said.

“I actually have a sense of empowerment,’’ she said.

“I’m running around crazy but there’s just a little part of my attention . . . that sort of says ‘Look what’s happening, notice how I’m living.’ It’s just opened up this new way of being.’