Middletown, CT (USA) -- Prayers, blessings and a group of 50 or more expectant followers welcomed a collection of Buddhism’s most sacred texts to the Chenrezig Tibetan Buddhist Center Sunday morning. 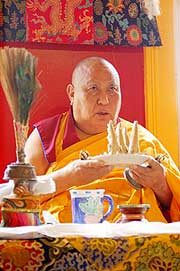 << (Donald Occaso | Special to The Press) Khensur Lobsang Tenzin Rinpoche, resident teacher at the Chenrezig Tibetan Buddhist Center on Main Street in Middletown, presides over a ceremony at the center Sunday.

In a human chain that spread nearly a half block along downtown Main Street, where the center is located, the sacred texts — including the Kangyur, made up of Buddha’s 100 pronouncements, and the Tangyur, a collection of associated Indian commentaries — were brought to the center’s shrine room, where they will be kept in two special cabinets built on a newly-constructed altar to Lord Buddha.

The texts, which number 313 in total, were handed in twos and threes to those lined up outside the center so they could be carried from where they were previously stored, at the home of Khensur Lobsang Tenzin Rinpoche, the resident teacher at the Buddhist center.

Printed in India, the sacred texts written in Tibetan were transported by boat all the way from the Near East to New Jersey, where three cars picked them up and brought them to Rinpoche’s apartment.

There they were taken from their boxes, sorted, organized and wrapped in orange cloth for the ceremony.

Sunday morning, each of the texts was handed out and carried up the stairs to the center’s shrine room, located just above Main Street.

“This is a momentous occasion for Tibetan Buddhists,” explained follower Dana Fleming as she snapped pictures outside along Main Street as the sacred texts were carried in.

The complete collection of texts is one of the few in the state and the country. Rinpoche’s translator, Jeff Allen, said he knows of only one other complete set in the state.

Once inside the shrine room, the texts were placed in their glass cabinets, where they will be stored on the altar. Prayers of cleansing and purification were then said by Rinpoche.

A prayer of refuge was recited by those gathered in the shrine room followed by a few words from Rinpoche himself.

“All sentient beings have the potential for happiness,” Rinpoche told those gathered through his translator. “The pathways that lead to this happiness are found in these texts.”

Now in their new home, the texts will be used for study and to help illuminate those pathways for local followers.

Required to return on occasion to India to teach, Rinpoche is a revered figure for Buddhist followers, as Allen recalled learning on a trip to the country with Rinpoche.

“People dove into ditches to pay homage to him,” said Allen, who explained that Rinpoche is a close associate of the Dalai Lama, who greets him as if they were long lost friends with a ceremonial touching of the heads when they are at the same event or ceremony.

After teaching the ways of Buddhism to literally hundreds of thousands of students, Rinpoche is now in retirement, but still finds the time to continue to teach converts and believers in the local community and in the city when he can — a task that will be greatly facilitated by the arrival of the sacred texts.

While the texts have been blessed and now reside in their new home, the work of cataloguing them is still not over. Allen, who recently opened a restaurant in Madison, will be cataloguing each of the 313 texts in English over the coming months.

Rinpoche will also be using those texts to teach those who are interested in learning the ways of Buddhism.

“Whoever has the desire to read these books are allowed,” Rinpoche told those gathered in the shrine room during the ceremony. “I am glad that they have arrived.”

The Chenrezig Tibetan Buddhist Center has been located at 504 Main St., on the second floor, since 1997. Before that, it was run out of homes in Bloomfield and Middletown.

The center holds a two-hour teaching each Sunday at 10 a.m. with a translator, as well as prayer and meditation Saturday morning and Tuesday evenings. The first Tuesday of every month is an introduction to Buddhism class at 7 p.m.