Pittsburgh, PA (USA) -- The First Unitarian Church in downtown Pittsburgh witnessed a different form of prayer and worship when it hosted a multi-traditional Vesak Celebration. 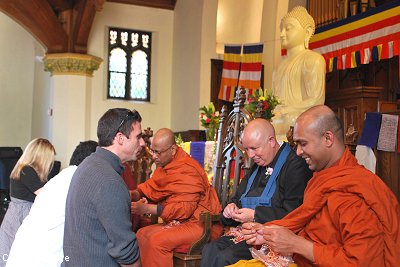 Members of the Pittsburgh Buddhist Center and other Buddhist sects from the Pittsburgh area gathered on Sunday the 9th of May for a multi-traditional celebration of Vesak to commemorate the Birth, Enlightenment and Parinirvana (Death) of Gautama Buddha.

This is the second time a multi-traditional Buddhist Vesak celebration was held in the city of Pittsburgh and a mass of devotees attended the event. Ven. Soorakkulame Pemaratana Thero and Ven. Vetara Mahinda Thero represented the Pittsburgh Buddhist Center, while members of the Buddhist center participated in the event by reciting Bakthi Gee. Devotees of other Buddhist sects also contributed to make the event a success.

On the 23rd of May, Pittsburgh Buddhist Center will have a Vesak Program on its premises and members, well-wishers and community residents are invited to attend. Further information can be obtained from the PBC website.