Raynham, Massachusetts (USA) -- Four years after setting up home and shrine in a humble New England farmhouse, a group of Thai Buddhist monks is preparing for grander quarters. 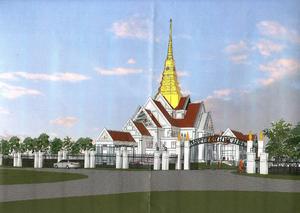 << The temple, or Wat Nawamintararachutis, will be the largest in New England, and possibly in the world, outside of Thailand. The building will sit 154 feet from the road and slope down toward the Taunton River. It will include a temple, museum, meditation center, dormitory for about 16 resident monks who will live on site, and gardens.

By 2012, a sprawling 60-foot-high Theravada Buddhist temple and meditation center will rise from the South Street East property. It will be topped by a 180-foot golden spire.

The complex will culminate the long-held dream of Boston-area Thai families to honor their monarch, King Rama IX, Bhumibhol Adulyadej, who was born in Cambridge in 1927.

The resident monks had been housed in small apartments from Brighton to Watertown.

After searching for land expansive enough for a new temple, cultural center, and monastery, they finally planted roots on the 50-acre parcel near Hill Street.

“This is the permanent land and the permanent home of the temple,” Lamiad Wechapak, a Brockton resident of Thai origin, told The Raynham Call in 2007, not long after six monks settled intothe 1850 farmhouse.

She said the experience in Raynham had been positive.

Since arriving, the resident monks have spent their days meditating, chanting, counseling laity, and studying the Dhamma or the teachings of the Buddha.

In 2007, residents along South Street East said they found the monks pleasing to watch in their saffron robes and sandals, as they tended to their garden and strolled the property.

Three years later, the welcome mat still appears to be out.

Only a handful of abutters attended Planning Board hearings this year as the elaborate site plans were reviewed and approved. None voiced objections.

Selectmen Chairman Marie Smith, who manages the nearby Pine Hill Estates Mobile Home Park, said she has heard nothing negative about the new temple.

“From what I saw, it looks like a wonderful building,” Smith said, after viewing a model on display.

The temple, or Wat Nawamintararachutis, will be the largest in New England, and possibly in the world, outside of Thailand.

The site will be formally landscaped and preserve existing maple trees and stonewalls. Five acres will be used for the temple. The remaining acreage is environmentally protected.

The building will sit 154 feet from the road and slope down toward the Taunton River.

It will include a temple, museum, meditation center, dormitory for about 16 resident monks who will live on site, and gardens.

The proponents will seek a variance on the town’s 40-foot-height bylaws. The soaring steeple complies with local and FAA regulations, Been Wang, of Architectural Resources Cambridge, said.

The temple and meditation center will be used for educational and religious purposes, including meditation and chanting services, religious rites, and teaching about Buddhism, Thai culture, and language.

Two major events a year, in the spring and fall, and another nine or 10 celebrations throughout the year, are expected to draw between 300 and 700 people but the attendance will be staggered.

In addition to the 240 parking spaces and a grassed area for an additional 100 cars, Depuy/Johnson & Johnson have offered use of their parking area in Raynham Woods Commerce Center and participants will be shuttled to the site.

Police details will be required to direct traffic for major events. Parking will be banned from South Street East.

Fire officials have approved the emergency access around the building, sprinkler plans and alarm systems.

The building will be tax exempt as a religious facility.

The Theravada Buddhist group of the Mahanikaya sect is registered as a nonprofit organization: the NMR Buddhist Meditation Center. It is part of a 2,500-year-old tradition that believes by letting go of desire and attachment, a person can be free from suffering and attain Nirvana or “awakening.” Its followers say it is a religion of wisdom and compassion.

“Anyone can come as a guest and observe and enjoy or join us in chanting and prayer,” Wechapak said. “Buddhism is an open religion. We accept everyone in our temple.”