Athens, Georgia (USA) -- Athens is a predominantly Christian town. A leisurely drive around town reveals protestant, Methodist, Baptist and Catholic churches. On any given Sunday, the porches, lawns and sidewalks of these churches are filled with Athens’ residents in their Sunday best, chatting and catching up after a long week. 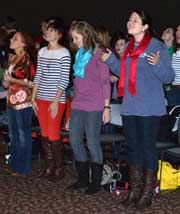 << Students fall on faith in face of choices, struggles
Christian, Buddhist and Jewish organizations are common on campus, but Buddhist students may have no central location to hang their hat. What's more, they may not want one. It's about the practice,not the community. MARIJA VULETIC/Staff

Students have the opportunity to join a variety of different Christian organizations at the University which have their offices either on or near campus.

Representatives from these organizations passing out flyers in Tate or encouraging students to attend their weekly meetings become familiar sites on campus.

But Athens’ residents won’t see a Buddhist community center. Such a thing doesn’t exist. More so, Buddhist practitioners in Athens may not want it to.

It’s been just over a year since Coco Ogawa, a second year masters student, arrived at the University from Osaka, Japan.

Her introduction to Buddhism came from her family. While Japan has become an increasingly agnostic and atheist nation, Ogawa’s parents made sure that she grew up in a Buddhist household. Before coming to the US to get her undergraduate degree at the University of California, Ogawa attended a Buddhist school in Japan.

But despite the fact that she’s now the only Buddhist in her classes, she doesn’t feel isolated or lonely.

“People here are really welcoming to me,” Ogawa said. “I’ve been here for a year, and besides me, all of my classmates were Christians. I don’t know how much they believe in Christianity, but some of them are really strong believers. They are willing to know my beliefs, and I’m willing to know their beliefs. Especially because of my major, landscape architecture, there’s a lot of influence from Japan which is an important place in Zen Buddhism. Partially because of that, they have a positive attitude towards Japan and Buddhists.”

Ogawa practices Nichiren Buddhism which is based on teachings of the 13th century Japanese Buddhist reformer Nichiren. Her sect follows the Lotus Sutra, which teaches that all people have an inner Buddha nature, or Buddha-dhatu, and consequently can achieve enlightenment in their present lifetime.

Like Ogawa, Kate Morrissey has found Athens to be a hospitable and welcoming place to people who practice Buddhism.

Morrissey was raised in a Catholic household in South Dakota, but as she got older, she realized that that path wasn’t working for her. She was introduced to mediation in 2000 and now considers herself a Buddhist who focuses on Zen practices. She also teaches yoga classes at Rubber Soul Yoga and has been attending the Athens Zen Group since she moved to Athens almost eight years ago.

“I think a lot of Catholics flexibly hold onto ideas, where people take what’s good and don’t worry as much about the other stuff," she said. "That doesn’t work for me. I was introduced to mediation, and I liked having a specific technique, and I liked the quietness in space. It was very apparent early on that that’s very helpful. Once I started in that practice back in 2000, I just kept going. It really resonated with me. But I didn’t have a strong launch from any church. It was just what fits with all my values and what also do I find helpful, supportive and nourishing. Buddhism is that way for me.”

Sometimes the path to Buddhism is not as straightforward as it was for Morrissey and Ogawa. In fact, not all practitioners of Buddhism necessarily consider themselves a Buddhist at all.

Rick Fyock, a regular participant at Athens Zen Group, grew up a fundamentalist Christian in Ohio and now calls himself an agnostic who practices Buddhism.

Before he began practicing, he said he was an angry person who was constantly judging others.

“I was a fundamentalist Christian. I didn’t feel that judging people was right, but what I did was judge people for not loving their neighbors," Fyock said. "I ended up going through a lot of different denominations until I finally became an agnostic. But as an agnostic, I still had this problem where I was judging and being verbally mean to people because they weren’t loving their neighbors. I really didn’t have much of a problem with it as an agnostic except for that I was very angry, and I didn’t know why.”

The actual practice of Buddhism is the thread that ties practitioners together, but that connection can’t be seen by the general public.
Morrissey said even though the Buddhist community in Athens is largely invisible, it’s nevertheless strong and thriving.

“I would say that there are a number of Buddhist communities in town," Morrissey said. "I’ve been sitting with the Zen group since I moved here seven, almost eight years ago, every week, and this has been a really consistent group. It seems like some of the other Buddhist groups are more transient, and certainly there are Buddhists who emphasize the community element less. But I feel like there’s a community here to the extent that I practice with them.”

At the same time, she thinks that Buddhism is much less worried about the identity of the practitioners than other religions. For Morrissey, Buddhism is more about the practice than it is about a way to identify herself. For example, she’s been attending the Athens Zen Group for almost eight years, and she’s never once asked anyone if they considered themselves a Buddhist or not.

“Maybe it’s a little less emphasized as a question. I wouldn’t really think to ask somebody whether they believe they were Buddhist or not because it’s more about practice than an identity,” she said. “I don’t know if people hang their hats solidly on the term Buddhist. Usually I’ll just say that I practice Buddhism. People have different ways of saying it. It’s a flexible identity.”

As an agnostic who practices Buddhism, Fyock embraces the idea of a fluid identity.

Similar to Morrissey, the key to lessening his suffering and becoming a better person focuses on this own individual practice of Buddhism rather than being the member of a visible Buddhist community.

“The mediation, the dharma talks, the readings and all this stuff has helped me with my suffering because by not being mean to people, I suffer less, not so much because they attack me but because I feel bad when I’m mean to people,” he said. “This has helped me a lot. I’m not saying that I’ve perfected it, and I don’t do it anymore, but I do it less, and I suffer less.”

Buddhism’s aim is addressing the question of suffering, and Morrissey hopes the practices continue to grow, so they can help each individual person become happier.

“I tend to hope that the practices will keep evolving to figure out what’s helpful and to fit with what’s workable in the current place that Buddhism lands in,” Morrissey said. “It’s moved all over, from India to China to Japan, and it looks different in all those places. I’m interested in this question about what it will look like in the US. It’s sort of new here, and it’s starting to change a little bit.”

Ogawa emphasized that the differences between Christianity and Buddhism seem minute because ultimately, both paths are about practicing the beliefs of the faith through an appreciation of what each person has been given.

“Before coming to the States, I didn’t really know the difference between my religion and other religions. I’m still learning my own religion, and I see similarities and differences,” Ogawa said. “The strong believers of Christianity appreciate everything. They appreciate God, appreciate people who make them food and appreciate people who are spending time with them. That’s a really positive attitude that we also try to have as Buddhists.”