Mims, FL (USA) -- It took a massive crane to lift a 40-ton, 35-foot-long statue of Buddha into place Friday at the Brevard Buddhist Center. 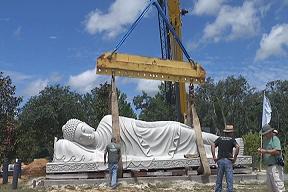 << Crews lift 40-ton statue into place at Buddhist center A crew carefully lifted the granite statue depicting religious figure on his death bed, moving it a few feet at a time.

The 'Nirvana' Buddha was created in Vietnam and shipped to the White Sands Buddhist Center in Mims, just a couple of miles from the Brevard-Volusia County lines.

"I think it's interesting that it's here in Mims, it's not something people would expect to find here," said Morris Sullivan, of the Volusia Buddhist Fellowship.

It was a daunting task -- imagine precisely lifting the weight of 20 cars, and then inch-by-inch, lowering it onto a large concrete platform, about the size of a backyard swimming pool.

As the crane operator brought it to rest, 10 men helped guide it to the right spot.

But this latest granite statue, in a way, dwarfs in comparison to two other ones already on the property.

The first was installed on the grounds in February 2012.

The largest statue was put in six months ago. It weighs 200 tons, but it takes an additional 200 tons of concrete to support it.

The Henric-Mac Corporation concrete company has put in all three statues for White Sands.

It's a delicate process dealing with tons upon tons of concrete and steel.

"They aren't really designed and they don't give you any engineering for lifting. They give you rough weights, no bearing points. You have to figure it all out by looking at the design," said Richard Hendrickson of the Henric-Mac Corporation.

"Trying to get that last 190,000 piece on the top, that we had to put in within an eighth of an inch," Hendrickson recalled.

It took about a day for the 60-ton statue.

Friday, the crew spent about three hours nestling the last one in place near the reflecting pool.

The project is set to be completed in 2015, the tenth anniversary of

The group is expecting some 2,000 people to attend the