Sabine, Louisiana (USA) -- The parents of a Buddhist students filed suit against the Sabine Parish School Board, alleging their son was subjected to religious harassment by teachers and administrators for not being of the Christian faith. 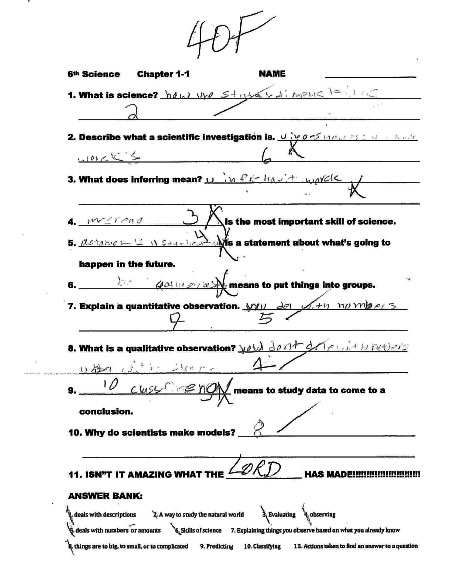 Screenshot of the test paper answered by "C.C" and marked by his teacher Rita Roark

The parents of a Buddhist student are joining forces with the American Civil Liberties Union to sue a public school board in north Louisiana, alleging their son was called "stupid" and given low marks for not adhering to Christian doctrine taught in his 6th grade science class.

Sharon and Scott Lane are the parents of three children enrolled in the Sabine Parish School System in rural northwest Louisiana. In a complaint filed Wednesday (Jan. 22) in U.S. District Court, the Lanes argue their son "C.C" became the "target of proselytization and harassment by faculty and administration" at Negreet High School when it became apparent he was not a Christian.

"All students, regardless of faith, should feel safe and welcome in our public schools," the court documents said. "But that is not the case in the Sabine Parish School District in Sabine Parish, Louisiana, where school officials actively inculcate Christianity and discriminate against minority-faith students."

The court case has already made national headlines, where pundits and legal scholars are noting the uniqueness of the case as it pertains to the question of a public school student's First Amendment rights.

Marjorie Esman, executive director of the ACLU of Louisiana, said suits brought against religious discrimination in public schools aren't unusual. But she thinks this case showcases a particularly extreme instance of religious harassment.

"This was not an instance where someone can say it was a well intentioned, but perhaps misguided, teacher, or a principal, that wanted to make sure kids 'got saved,'" Esman said Wednesday (Jan. 29). "(In this case) the teacher, principal and superintendent are all complicit in religious indoctrination to the point that they engaged in public humiliation of a student of a different faith."

C.C., who is of Thai descent, and his legal parent Sharon are both Buddhists. Named as defendants on the suit are the Sabine Parish School Board, Superintendent Sara Ebarb, Negreet High School Principal Gene Wright and Rita Roark, C.C.'s 6th grade science teacher.

During less than a month at the school in August and September of last year, the lawsuit claims C.C. was told those who didn't believe in God were "stupid" and was given low marks on tests when he didn't answer questions pertaining to religious doctrine.

When C.C. left the blank empty, Roark wrote in "LORD" in large red letters and marked the answer wrong. The Lanes said students in Roark's class, in which their daughter "S.L." is also a member, get extra points for citing Scripture at the bottom of tests. They allege Roark also skipped over the chapters in the textbook that discuss evolution.

When the Lanes wrote a complaint letter to Principal Wright, they said he read it out loud over the school loudspeaker. Superintendent Ebarb, before reminding the Lanes they were "in the Bible Belt," suggested they transfer C.C. to another school that has "more Asians," the court documents said.

This is what the Lanes did, taking C.C. out of Negreet and enrolling him at Many High School. Their other two children remain at Negreet, where Christian paraphernalia can be found in the entryway, hallways and classrooms, and where the Lanes said students are required to attend compulsory assemblies that feature official school prayers.

The school's motto, once "We believe that God exists," has now been removed from the website and replaced with a statement that says, "Our students are more than just a number...they are family."

The Lanes are asking for a declaratory judgement that declares the actions of the defendants unconstitutional, a preliminary injunction ordering them to cease teaching Christian doctrine and harassing non-Christian students in the school, as well as monetary damages.

In response, Ebarb issued a statement saying the school board had only recently become aware of the suit.

"A lawsuit only represents one side's allegations, and the Board is disappointed that the ACLU chose to file suit without even contacting it regarding the facts. The school system recognizes the rights of all students to exercise the religion of their choice and will defend this lawsuit vigorously."

Walter Lee, who was recently indicted on federal theft charges, represents the state school board for the area. He said he hopes the parties can handle the issue outside of court.

"I just regret that it's a question or a concern, and would hope that the school officials and the parents can resolve it in a way that's acceptable to both sides," Lee said Wednesday. "It would be better if they can resolve it outside the court system so that the legal system does not have to get involved."

After the judge first assigned to the case, Donald Walter, recused himself, it was reassigned to Judge Elizabeth E. Foote of Shreveport on Jan. 23. It will be several weeks before the next steps in the case are expected to occur.