Pineville, Louisiana (USA) -- If giving a small piece of his front yard can bring peace, understanding and tranquility to the world, then it is a small price to pay for Eddy Lashney. 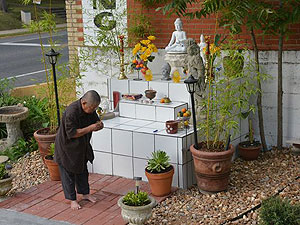 << Phung Le of Pineville worships at the Buddhist shrine located in Eddy Lashney's front yard on Main Street in Pineville. Le and his wife show up everyday, sometimes twice a day. The couple, originally from Viet Nam, have been worshipping at the area for six years at which time only a Buddha statue sat on the ground near the wall. The shrine has recently been built up and decorated by members of the Buddhist community. The shrine draws about 30-40 visitors a week.(Photo: Melinda Martinez)

"It's been a beautiful thing," said Lashney, who owns the front yard on Main Street in Pineville where a Buddhist shrine has been built by members of the local Buddhist community.

"It really has. We are honored to have this happen."

Several years ago after purchasing the property, Lashney placed a Buddha statue in the yard.

"I've always been deeply fascinated with Buddhist philosophy but I don't consider myself a Buddhist," Lashney said. But he feels the philosophy has played a major role in the person he has become.

Phung Le, 71, of Pineville and his wife started worshipping at the site about six years ago when only the Buddha statue sat on the ground. Both go to the site to worship twice a day. The couple is originally from Viet Nam. They have been in the United States for seven years.

The building of the shrine gained momentum a couple of months ago. A man who goes by the name of Billy was hospitalized for 12 days with a virus. He was in the intensive care unit and lapsed into a coma.

His wife, family and friends were looking for a place to pray when they were told about the Buddha statue in Lashney's yard. Cindy Pham, a friend of Billy's and his wife's, said they prayed to Buddha everyday for him to get well. And one day, Billy woke up. He stayed in the hospital an additional two days and was released with no sign of the virus.

To thank Buddha for Billy's recovery, the Buddhist community began building the shrine as it now stands. The lone Buddha which sat on the ground under a tree now sits on an altar tiled with ceramic tile imported from Asia. Other statues were placed on the altar with Lashney's Buddha statue. Plants have been placed around the altar.

Thuy Nguygen has also been worshipping at the site for the past six years. She had suffered some health ailments as well and prayed to Buddha. She not only prayed for herself but for all the people who were at Huey P. Long Hospital with her including the nurses and doctors.

"I keep praying to my Buddha," she said. Nguygen prayed for everyone no matter what their race, religion or color. "I don't care. I pray for everyone."

She said the Buddha said to love the whole world and that includes animals and people. The Buddha, she said, teaches people how to live. To pay the Buddha back for her blessings, Nguyen shaved her head.

"I love my Buddha,"she said. "He taught me how to live and how to love people."

Nguygen said Buddha was born a prince but gave up everything to help others find enlightenment.

The shrine now draws between 30-40 visitors a week. "That number seems to be rising," said Lashney. "People come here daily." In addition, Lashney said this shrine has inspired another Buddhist shrine to be built in Baton Rouge.

Lashney feels that this has not only been good for the Buddhist community but good for all people in the community.

"This may be the only contact people have with another culture besides their own," he said.