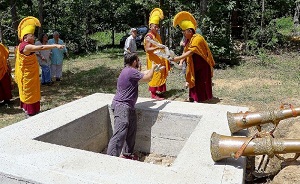 <<  PHOTO BY BILL BOWDEN
Geshe Dakpa Jigme of India (left) and Geshe Thupten Dorjee, who lives in Fayetteville, hand rifles to Wesley Clawson to bury in the foundation of a Tibetan Buddhist monument being constructed in rural Madison County near Crosses. Clawson is president of the Tibetan Cultural Institute of Arkansas.

The consecration ceremony symbolizes the nonviolent nature of the monument, called a stupa, said Geshe Thupten Dorjee, a monk who lives in Fayetteville.

It's not a political statement about gun control, he told about 25 people who watched the ceremony at the Land of Infinite Bliss Retreat Center in a wooded area on a gravel road near Crosses.

"It's not about being against those who have a gun," he said. "It's about harmony and nonviolence."

Dorjee and Sidney Burris founded the Tibetan Cultural Institute of Arkansas in 2006 as a way to teach others about the culture of Tibet and Buddhist philosophy. Dorjee is an instructor in the J. William Fulbright College of Arts and Sciences at the University of Arkansas at Fayetteville. Burris is a professor of English at the college.

After listening to 35 minutes of monastic chanting Saturday morning, spectators participated in the ceremony, tossing handfuls of sand onto the weapons that were donated for inclusion in the stupa.

The weapons were wrapped in sacred cloths called katas before the burial. The 7-by-7-foot base will be sealed in concrete before the next phase of construction.

The stupa will be 16 feet tall when completed. It's the only one in Arkansas. There are about 20 stupas in the United States and thousands across the world, Dorjee said.

The stupa will be made of concrete, wood and stucco, said Wesley Clawson, president of the institute.

Besides spent weapons, the stupa will contain thousands of religious artifacts, including tiny scrolls and clay figurines. It also will contain vases filled with semiprecious stones.

The stupa will serve as a site for meditation, Dorjee said. Stupas are believed to help ward off natural disasters, like earthquakes, and help draw peace to the areas where they are built, he said.

Construction on the retreat center began in 2013 after the land was donated to the institute. There's a main building at the site, but Dorjee wants to install plumbing and build huts for people who want to go there to meditate.

A native of Tibet, Dorjee's family fled to Bhutan and then India after China invaded their home country in 1959. He entered the Drepung Loseling Monastery in India at the age of 13 and studied for 25 years.

He moved to Arkansas in 2006 and has since become a naturalized U.S. citizen. Over the years, he has drawn many Tibetan Buddhists to Fayetteville, including the Dalai Lama in 2011.

Geshe Pema Rinchen of Calgary, Alberta, is spending a month in Arkansas to oversee installation of the stupa, which could take months. Geshe is a title that means spiritual leader.

Besides Dorjee and Rinchen, six monks from The Mystical Arts of Tibet also participated in the ceremony Saturday. The group from India was in Eureka Springs last week to build a sand mandala, which is a traditional work of art made of millions of grains of colored sand.

After the mandala was completed Thursday, it was destroyed in a ceremony to symbolize the impermanence of life.

Sand from the mandala was given to people who attended the ceremony at the Basin Park Hotel in Eureka Springs. Some of the sand was placed in a local creek, and some was taken to the stupa site to be included in the foundation.