Buddha on the Bayou

When the Wat Buddharaska Temple in Irvington burned a couple of months ago, it brought together a group of people determined to see it rise again from the ashes

Mobile,  Alabama (USA) -- There are over 500 Christian churches in the Mobile area, according to usachurch.com. The South has a reputation for being heavily Christian, so this number should come as a surprise to no one. 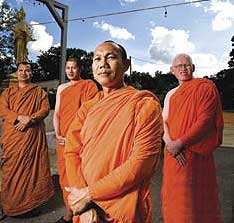 But take a drive through Irvington, down Murray Heights Drive where the pavement ends and the dirt road begins and where the trailers begin to replace the houses, and you will find something surprising. Behind a metal gate stands the Asian Community Center, a gold colored statue of the Buddha and an empty lot where a Lao Buddhist temple once stood.

On March 23 the five monks of the Wat Buddharaska Temple left in the early morning to visit a Thai family in Panama City, Fla. Later that morning, the temple started to burn.

“I got a call from the neighborhood,” says Chaiwat Moleechate, Temple abbot. “They said ‘Do you know the temple has fire coming out of it?’ and I didn’t know what was going on.”

According to local authorities, the fire started in the kitchen area of the temple. No one was harmed in the fire, but everything inside was damaged from the smoke and the water. Now the temple, one of four serving the diverse Asian communities in south Alabama, is looking to rebuild.

The historical facts of Buddhism, according to Huston Smith’s “The World’s Religions,” are that Siddartha Guatama, the man who would become the Buddha or “Enlightened One,” was born around 563 B.C. in what is currently Nepal near the Indian border. He was the son of a king, but a western comparison would see him more as a feudal lord.

Siddartha had a luxurious upbringing for his time, with everything provided for him. Despite all this, he broke from his estate in his 20s after, according to the author, he realized the “inevitability of bodily pain and passage.”

Spending time in the wilderness, Siddartha pursued different avenues of the Hindu faith in his search for enlightenment. He spent a portion of time with several of the foremost Hindu masters of his day in order to learn their wisdom and later joined a group of ascetics, those who use mortification and extreme fasting as a path to enlightenment.

He eventually abandoned the later path and embraced the Middle Way, which Smith writes is “the concept of the rationed life, in which the body is given what it needs to function optimally, and nothing more.”

Buddhist tradition states that Siddartha, realizing he was close to reaching truth, sat down to concentrate. According to Smith, “The Evil One, realizing that his antagonist’s success was imminent, rushed to the spot to disrupt his concentrations.” Siddartha underwent a series of trials and temptations that somewhat parallel what Jesus went through in the desert.

Surviving these with an unbroken will, he sank deeper into meditation and eventually “The Great Awakening” happened, and Siddartha attained enlightenment and became The Buddha. Afterwards he spent around 45 years bringing his message to the people until he died in 483 B.C.

The religion of Buddhism can be generally seen as trying to move past the suffering in human existence. Most Buddhists accept such traditions as “The Four Noble Truths” and “The Eight Fold Path” as the way to enlightenment. Like most religions though, there can be great differences in the details.

The monks of the Wat Buddharaksa Temple practice Theravada Buddhism, generally considered a more conservative form of the religion. Theravada tends to minimize ritual and metaphysics and considers the Buddha a teacher and a saint. The other branch of Buddhism is called Mahayana.

Many of the duties of the monks consist of helping people with meditation and teaching them “dharma,” or the teaching of the Buddha. The Abbot also has discussions with people that resemble a sermon.

“But the people, whenever they have a problem and would like to meditate they come see me and we work on it,” says Moleechate the abbot. “We are not that much different than other religions.”

The monks only eat two meals per day, with one in the morning and the other around noon. They are not allowed to eat anything until the next morning and they are only allowed to drink water. This gives them almost 18 hours with out any solid food. During this time they meditate and tend to their other duties.

Some of the differences in the religion are more cultural than spiritual. The Asian community in the area is diverse, and the temple would serve mostly 300 Lao families and about 60 Thai families with some Vietnamese and Cambodian families as well.

The abbot and his monks don’t just help with spiritual matters. Sometimes the Abbot acts as a translator.

“For people out of state, if they have a problem, I try to help them out and translate for them on the phone,” Moleechate said.

There has been a strong Asian community in southern Alabama for some time, but the Wat Buddharaska Temple was founded in 1997. The land was bought and then donated by Bouathong Saysombath, who at the age of 82 now lives as a nun at the temple.

Saysombath came to America in 1975 as a refugee from the Vietnam War. Before buying the land for the temple, she spent time with family in St. Louis, helping take care of grandchildren for $115 per week. As a way to reward her for her help, her family sold her the land to build the temple. She is still trying to pay her children back with whatever money she has left over at the end of the month.

“I needed peace in my life,” she said laughingly, “I have too many children!”

Money to build the temple came mostly from the community. The people in the area did most of the hard labor involved in the construction of the temple and community center in order to save money on labor cost.

Abbot Chaiwat Moleechate arrived at the temple in 2001. Originally from Thailand, he had lived in Seattle for three years before moving to Irvington.

In the wake of Hurricane Katrina, the temple did everything it could to support the community. Moleechate and the monks drove into southern Mississippi after the storm passed to pick up members of their community who were stranded and lost their homes. Other times they would deliver food and supplies to the people. Throughout the disaster the temple helped around 300 families by either giving them food or housing homeless families in the community center’s event hall.

Now the temple is no more and the monks are taking whatever help they can get. Many people throughout the local Asian community have done what they can to help.

“We had this money from the celebration of the Asian New Year in April,” Moleechate said. “On that day the people came and we did a lot of fundraising. We got around $30,000 from fundraising and donations. For the next building we plan on it costing around $150,00. We’ve got around $40,00 in the bank.”

The abbot has received help from the other three temples in the area and many individual donors in the community. One of the donors, who would prefer to remain anonymous, was one of the many families from Mississippi that was helped by the temple after they had a complete loss of their home. The family is trying to sell off some property. Once the sale goes through, they will loan the money to the temple.

Community members loaning money to the temple is not an unfamiliar practice, but Moleechate does have some conditions. First, they have to have no interest on the loan for two years. If its not paid in that time period, they will tack on 5 percent. They also cannot say for certain when the loan will be paid back or how much the regular payments will be. If too many people loan the temple money, the monks will choose whom to payback first by drawing names.

One member of the community is giving back by using his skills as an engineer. Don Wijeratne, a Buddhist who lives in west Mobile, is drawing up a set of building plans for the new temple.

“He’s working so hard on the plans,” says Moleechate.

The plans Wijerante is drawing up for the temple would usually cost $5,000 -$10,000 to do, but he seems happy to contribute.

“When I heard about the fire I wanted to volunteer my services,” says Wijerante.

Buddhism is the faith that Wijerante was raised in, but it goes deeper then that for him.

“I believe that religion is a very personal thing,” Wijerante said. “It’s not just who your parents are. I feel very comfortable with Buddhism. As a person of science and rational thinking, Buddhism appeals to me. It answers a lot of questions of human nature and doesn’t contradict science.”

Wijerante is one of many Buddhist in the community trying to help, but some non-Buddhists want to assist the Wat Buddharaska Temple.

Makie Smith, a Mobile resident, works as a 911 operator and has started a fundraising effort for the temple.

“When I went into work I heard about it because it was one of the bigger fires that happened all week,” Smith says. “I guess I was like everybody else at first thinking ‘Hey, that’s really sad, but doesn’t affect me,’ but what really got me motivated to do fundraising was not hearing anything else about it in the news and the newspapers and online.”

Smith finally decided to got down to Irvington and talk to the abbot himself and see if they needed any help.

“I felt like if that had been a Christian church that it would have already been built by now,” Smith says. “The whole community would have come together to help.”

Smith, who was raised Southern Baptist, has been working to start different fundraising efforts, among them making a myspace page (www.myspace.com/watbuddharaksa) to get the message out. He has kicked up some interest, with organizations offering to put up items for a raffle or matching donations.

Smith has been doing all this fundraising work for the temple “because it’s the right thing to do,” he says. “It doesn’t matter what race you are and what religion you are, the community should help. We want to be this great diverse community and this great diverse nation, but when someone who is a different color or religion needs help and you don’t help them, that’s kind of stupid.”

“Most of them are like, ‘Sorry, we feel bad for them but we are spending the money elsewhere.’ I don’t get it” Smith says. “I just wish people would open their eyes, especially those that call themselves Christians. Jesus said to love one another and to do unto others as they would do unto us. He didn’t put a ‘but unless they are Jewish or unless they are Buddhist or unless they are Muslim.’ He commanded us to do it.”