Savannah, GA (USA) -- Members of the Buddhist Association of Savannah are planning to build a 3,200-square-foot temple on their property on U.S. 80 in Garden City, according to association president An Nguyen. 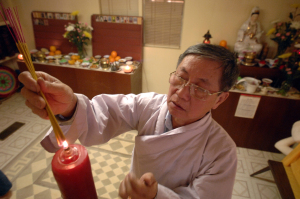 << Member of Cat-Tuong Temple in Garden City, Pham Lich, lights incense during a service one Sunday in May. Members of Cat-Tuong Temple find truth in all religions but lean on their Vietnamese tradition and Buddhist faith to transcend suffering. Hunter McRae/Savannah Morning News

The new building will include marble floors through the roughly 2,000 square feet of worship space and about 1,200 square feet designated for a kitchen, dining area, library and bathrooms.

Nguyen said consultants have estimated the cost of the facility to range between $15,000 to $25,000.

Many of the icons used in worship - including a Dharma wheel and statues of the Buddha - are being ordered from Vietnam.

The new facility will nearly double the space in the Cat-Tuong Temple.

Since 2000, the congregation of about 250 area Buddhists - largely from Vietnam - have worshipped in a two-bedroom, 1920s cottage.

Nguyen expects the new building to be completed by Buddha's birthday, which falls this year on May 2.

Members of Cat-Tuong Temple observe five precepts similar to the Christian Ten Commandments. They forbid followers from the killing of any living being, stealing, sexual "misconduct," "false speech" and use of "intoxicating drink or drugs."

Buddhists generally are vegetarians or vegans, believing that killing animals is immoral.

Many members don't believe in a place called heaven. Instead, they believe in nirvana, or a state of existence that is free of suffering.
TOP