Grants, NM (USA) -- The road is an unpaved track through Ponderosa pines leading to a mountain meadow where a magnificent new structure gleams in the sunlight. The building is the Zuni Mountain Stupa (temple), a sacred monument and reliquary that represents the Buddha's wisdom and compassion. 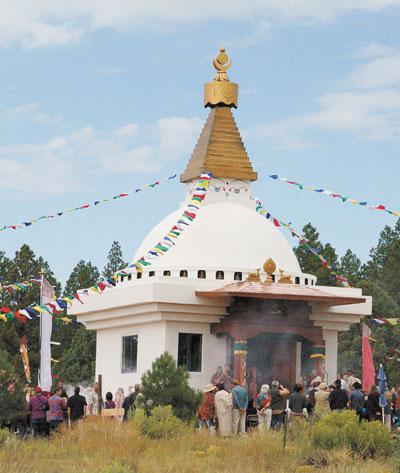 << More than 300 people were on hand for the blessing and consecration of the Zuni Mountain Stupa on Sept. 5. The Buddhist temple was years in the making.BEACON / DONAHUE

In Tibet and all Buddhist countries, the sites of stupas are gathering places for Buddhist practitioners, who come to pray, meditate and make offerings to accumulate merit and to connect with their own innate purity, according to the program.

A pristine white cupola with a gold spire tops the stupa, which was consecrated last Saturday in a joyous ceremony filled with vivid sights and sounds. Color abounded in the décor of the building, the prayer flags strung from trees and the outfits of the participants. Bells, gongs and chanting provided an auditory background to the festivities.

A ceremonial fire burned outside a white circle on the ground, which encompassed dancers in ornate and colorful dresses, aprons and headdresses with flowers. Each dancer held a ceremonial object, such as ribbons, gongs and hand bells.

Following the dancing, musicians playing brass instruments led a procession into the stupa past an altar adorned with flowers. The altar is adjacent to a waterfall filled with rocks inscribed with Buddhist prayers.

Male dancers wearing bearded masks, long hair and belts festooned with pompoms then danced in front of the new temple. They carried staffs painted in multi-color stripes as they blessed the mountains surrounding them.

Stanley and Shirley Giser, owners of the mountain property, and Tibetan monks from California greeted visitors, which included much of the Zuni Mountain population as well as out of town participants.

Local painter Jane Chilton was seen sitting at her easel, capturing the event on canvas as the festivities swirled around her.

In addition to the Giser home, the complex includes a prayer wheel house, which was built eight years ago, a cooking house and the new stupa.

The Zuni Mountain Stupa has been built in the monumental style called Duddul Chodten, which translates as “subduing negative forces.” To commemorate the Buddha's subduing of all outer negative forces and to continue the enlightened activity of overcoming negativity, Dudul Chodten style stupas have been built around the world

The dome, or bumpa, of the stupa is modeled after the Great Stupa of Boudhanath in Nepal, which is considered one of the great religious monuments in the world. Statues of enlightened beings in their various forms, ranging in size from a quarter of an inch to two feet tall, fill the bumpa.

A library of texts containing Buddha's own words, including more than 200 volumes of Tengyur texts and 100 volumes of Kagyur writings are stored in the bumpa. There are also texts from the major sects of Tibetan Buddhism.

A juniper long-life pole extends from the base of the bumpa to the uppermost spire of the stupa. The pole has four sides, each of which has been covered with sacred mantras and prayers of aspiration. The pole stands on two mandalas, one above the other.

Over the past five years, all stages of work on the monument were carried out in strict accordance with instructions for building an authentic stupa.

Buddhist leader Bhakha Rinpoche came to the U.S. in the 1980s, establishing various Buddhist centers under the auspices of his Vairotsana Foundation. For the past 20 years, he has been giving retreats and teachings on the Zuni Mountain land.

There are three major retreats each year between late May and early September and are announced three months prior to the date of the event.

To be included on the Zuni Mountain Stupa e-mail list, send a request to zunimtnstupa@gilanet.com. The group's website is: www.zunimountainstupa.org and the mailing address is 2062 Zuni Canyon Rd., Grants, NM 87020.