The Buddhists in our backyard

Palm Beach, FL (USA) -- Days before the Dalai Lama's visit to Palm Beach County, Mimi Bailey steeples her hands close to her heart and joins the rhythmic waves of Buddhist chants rising in a sunny corner of Lake Worth. 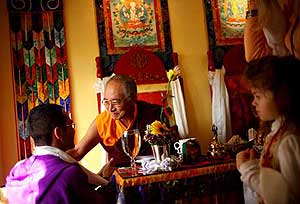 << The Palm Beach Dharma Center in Lake Worth.

It is the first day of the Tibetan New Year, Year of the Iron Tiger, and besides that, a particularly festive day at the Palm Beach Dharma Center, where the Jupiter nurse worships amid an eclectic congregation.

On this recent day, the congregation's principal teachers, two venerated Tibetan-born monks visiting from their New York monastery, lead an afternoon of prayers and celebration before more than 80 people. The local faithful — or Sangha, as any Buddhist community is called — regale them with sweets and traditional butter tea, homemade greeting cards and white, ceremonial "kata" scarves.

Like their long-exiled king, the 14th Dalai Lama, who will address a sold-out arena at Florida Atlantic University on Wednesday morning, the monks are a genial pair of brothers. Still now, after decades in the diaspora, they often note the wonders of America.

The Venerable Khenchen Palden Sherab Rinpoche and his younger brother, the Venerable Khenpo Tsewang Dongyal Rinpoche — Khenpo meaning high-ranking teacher and Rinpoche meaning precious one — fled eastern Tibet in the dead of winter with their parents and two sisters after the Chinese invasion in 1950. Theirs was an arduous escape to India, suffering hunger and hardship for more than a year before reaching safety. The passage was so brutal that their mother and sisters died along the way.

"They marvel every time they go to the grocery store — everything is so clean and convenient. It sounds very elemental, but they live from moment to moment. This is fundamental in Buddhism," says Bailey, who was one of the first members and founders of the Dharma Center, which now celebrates its 25th year of incorporation. "I've seen them have such gratitude for this life in America, this wonderful country."

Gratitude, she says, is "one of the primary ways to unite the human spirit. It is the precursor to joy."

One of the bedrocks of Buddhism, this kind of gratitude for the quotidian, comes from mindfulness, she notes.

Waking up in your own life.

This is how Bailey describes the influence of Tibetan Buddhism upon her days and nights. The ancient teachings and meditations, she says, have taught her to cherish "the bloom of the present moment," as Thoreau portrayed the concept of mindfulness.

Bailey applies the principles to her work as a registered nurse, even teaching a course on "mindfulness-based" stress reduction at Jupiter Medical Center.

And the wellspring of her inspiration is the light-filled, color-saturated Dharma — or teaching — center in Lake Worth. It is a one-story structure that in a past life served as a dermatologist's office. Its reincarnation came a decade ago, when Bailey and fellow local Buddhists reopened it as the Padmasambhava Buddhist Center at the Palm Beach Dharma Center, a place of learning, healing and meditation.

Tucked into a quiet corner of Federal Highway, it is a hub of local Buddhist life, offering yoga, meditation, chanting, prayer, massage therapies, lectures and discussion. And its Sangha is known across Buddhist networks to be a particularly engaged and active one, making the center — and its location in paradise — a magnet for out-of-state faithful.

It is the reason why a Spanish-born, New York psychiatrist named Antonio Abad decided to move to Palm Beach County this month.

"I wanted to be around this group. This Sangha is very serious, very committed," says Abad, a Bellevue Hospital psychiatrist who met the center's monks 18 years ago in New York and who has attended their winter retreats in North Palm Beach. "It's like having my family here."

Ditto for Kimberly Larue, a massage therapist and yoga instructor who moved from Chicago five years ago to be closer to this Sangha. She now leads meditation sessions and offers massage services at the center.

And Mercedes Valdes Donahue, a public health worker, travels each week from her home in Port St. Lucie to attend services here.

"The message of Buddhism is very pure. It encompasses every person," says the Cuban-born woman with close-cropped hair and Tibetan prayer-bead bracelets. As someone forced to leave her homeland at a young age aboard the Havana-to-Miami "Freedom Flights," she feels a special kinship with the Dalai Lama, whom she plans to see at FAU this week.

It is a kinship shared by many Cuban-Americans, who take inspiration from the Tibetan leaders' struggle against Communist invaders. Theirs is a shared litany of death counts, jailed opponents and persecuted souls.

And on an even more personal level, exile from Tibet is a reality the venerated monk brothers know firsthand. Long-established in New York, the brothers helped forge the local congregation and learning center. They also have monasteries in New York, Puerto Rico and India, where young students are being educated in the Tibetan tradition. Classes of young women are studying there to receive the equivalent of doctorates in Buddhist studies.

All of it is evidence of the brothers' efforts and their congregation's devotion to their lessons.

"They are following the teachings of the Buddha, the principles of nonviolence, how to be a harmonious people," says Khenpo, the younger monk brother, in English after a pause to interpret the Tibetan words of his older brother, Rinpoche. "And this is a beautiful place in the Sunshine State."

That the faithful are a culturally diverse group, and a non-Tibetan group, is something that does not surprise him. Tibetan Buddhism has bloomed in the diaspora, reaching beyond its own history, culture and language and planting seeds in mainstream America.

"We all practice the Dharma. We all share in the heart. It doesn't matter where you are from," says the younger brother, again interpreting. "We lost our country to communism, but we found acceptance in this beautiful country of freedom and peace. Our dream come true would be that the Dalai Lama's visit will open a window, so that this freedom will come to the people of Tibet."