WELLFORD, S.C. (USA) -- Hundreds of Buddhist devotees gathered at a rural spot in Spartanburg County on Saturday for the dedication ceremony of a new pilgrimage site. 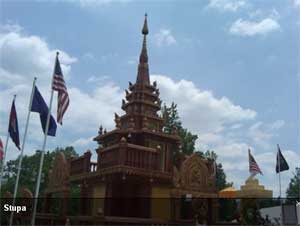 Members of the Cambodian community completed construction last week on a three-story Buddhist shrine, called a stupa. It's located beside the Wat Sao Sokh San Temple at 841 Shiloh Church Road outside the city limits of Wellford.

It's the first Cambodian Buddhist stupa in the United States. The dedication ceremony designates the Spartanburg County site as holy.

Maya Men, a Buddhist devotee who helped organize the three-day celebration, said the community chose to dedicate the stupa over the Fourth of July weekend.

"It's Independence Day for the United States and also independence for the stupa and the Buddha relics," Men told WYFF.

Monks in orange robes and nuns, who wore white, paraded around the shrine carrying relics which will be placed in the stupa.

Men said Buddha relics will occupy the top level of the stupa. She said the second level will house a statue of King Jayavarman VII, an ancient Buddhist king honored for leading Cambodian people to freedom and providing for their spiritual and physical needs.

The bottom level is reserved for the ashes of Buddhist lay people from across the country.

The ceremony also featured performances from from the Cambodian Classical Dance Troupe from Washington, D.C., and other cultural groups.

Buddhist devotees from across the country, who immigrated from Laos, Sri Lanka, Nepal and other countries, also took part in the festivities at the stupa.

Men said the worship site is open to all Buddhist devotees and tourists.

"It's for people everywhere," Men said.

The dedication celebration will continue through Sunday night.