Tuscaloosa, Alabama (USA) -- For most of the students at the University, it’s easy to find a church to attend. There is some form of church on most street corners in Alabama, and those wishing to go don’t have to look very far. 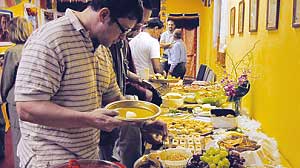 But some students at the University and residents of Tuscaloosa must look a bit farther.

Hoade said that, while there is not a Buddhist temple in Tuscaloosa, he has been able to find a small but strong community.

“It’s a lonely life being a Buddhist at UA,” Hoade said. “But once you find like-minded people it’s a really strong bond. There isn’t a temple in Tuscaloosa, but there are definitely people who practice Buddhism.”

Hoade recommended several ways to find other Buddhists in Tuscaloosa.

Many people post notices in the organic grocery store Manna on McFarland Boulevard, or you can search through people’s interests on Facebook, Hoade said.

“There is a good number of Buddhists on campus, but it’s a loose group,” Hoade said. “Oftentimes it’s a word of mouth thing. Once you meet that person it’s like a pebble dropped into a pond and the ripples go out and you see that there are a lot of other people. The networking is just amazing. It networks out and it happens organically, that is a really nice thing about Buddhism.”

Hoade also said being at a University makes it easier.

“The people you meet who are interested in Buddhism or are Buddhist are, generally speaking, the most inquisitive, most intelligent people,” Hoade said. “So at a University, which is all about learning, you’re going to find a lot of people who are into it already or who are open to it.”

Hoade said Buddhism can be defined by the four noble truths, the three marks of existence and the difference between the three vehicles of Buddhism. He recommended the Wikipedia page on Buddhism as an “excellent and in-depth” source for further information.

Hoade also said students wishing to look into Buddhism may e-mail him at seanhoade@gmail.com with the subject line “Buddhism.”

“Buddhism is not atheistic,” Hoade said. “It just doesn’t say anything about a god, it’s non-theistic.”

Will Anderson, a junior at UAB majoring in social work, is Buddhist and goes to Losel Maitri in Birmingham.

Anderson said many people have misconceptions about what Buddhism is.

“A lot of people get confused about Buddhism,” Anderson said. “It isn’t even really a religion; it’s more of a philosophy. There is no god in Buddhism; there is no deities or holy ghosts. However, you can combine it with other religions. There is Buddhism and Judaism or Buddhism and Christianity, but a lot of Buddhists are atheists.”

Anderson said Buddhism is a religion that is based on both compassion and realism.

“Compassion is the basic philosophy of Buddhism,” Anderson said. “Fundamentally, Buddhism is a very ideal sort of way of thinking, but at the very same time it is not ideal in the fact that Buddhists tend to view things very realistically.”

Anderson gave one quote from Buddha for those interested in looking into Buddhism - “Better than a thousand hollow words is one word that gives peace.”