Ann Arbor, MI (USA) -- Nestled between a defunct bike shop and a vacuum store, the Ann Arbor Zen Buddhist Temple is easy to notice and just as easy to miss. 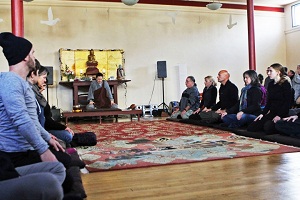 The bright yellow Victorian and the adjacent brick building don’t scream “temple.” But once on the other side of the stone wall, the pair of buildings, connected by a small garden, feel very much like a sacred space. There’s a tremendous calm energy hanging in the air. The street noise, though minimal on a Sunday morning, all but disappears.

Once inside the temple, the calmness I felt in the courtyard is intensified exponentially. After passing through an entrance room, I walk into the main temple room in silence. It’s packed. Most of the mats are taken already, but I find one in the back and sit down. Trying to meditate is really hard, and I guess the whole trying part defeats the purpose of meditation. At first, I find it difficult to keep my eyes closed. Something in my brain keeps flicking my eyes open nervously. When my eyes are closed I can’t help worrying that I’m doing this wrong. Is there something I should be thinking about? And then, nothing changes except it gets easier — I think about less. Mostly, I don’t think about trying to keep my eyes closed.

Then, a bell rings and we begin chanting a prayer that’s easy to pick up. While we’re chanting, the children who attend a kid’s service in the yellow house next door file in wearing animal masks. They perform a play about Buddha’s enlightenment that’s endearing and extremely informative.

Haju Sunim, the resident priest of the temple (known to the temple community by her first name, Haju), said a few words about meditation, mindfulness and strengthening our practices. Incredibly poised and gentle, Haju is the spiritual and community leader of the Ann Arbor temple. One of her congregants described her as “the North Star” of their temple. She greets everyone as they exit with a bow and introduces herself to any new attendees.

In a conversation later that day, Haju described her congregation as “an increasingly diverse community of people from all walks of life … an increasingly supportive community of people who help each other.” It is also an incredibly welcoming community. At the service I attended, many, like myself, were at the temple for the first time; a few were even rookie meditators too. But after the service, lifetime members and newbies conversed about mindfulness, meditation and the upcoming women’s basketball game.

The temple also offers services outside Sunday services like the one I attended. Haju said the temple “offers means for people to go through the various aspects of the life cycle, you know, in a spiritual way.”

They “conduct baby blessings, have marriage ceremonies, divorce ceremonies even, and house blessings and funerals and memorial services” to give members of the community means of commemorating spiritually each milestone in their lives.

The entire temple community has a strong focus on activism and community service.

“We also try to do services in the community so we work in the prisons and we help with hunger relief, and we do some fundraisers,” Haju said.

Next door, I attend a meeting with members of the community who focus on environmental consciousness. They practice a sort of sacred activism: activism driven by the teachings of mindfulness. The group attends conferences, participates in marches and goes on meditation retreats. In the meeting I attended, they discussed opening these retreats for non-Buddhist members of the Ann Arbor community who share their passion for conservation.

“We do interfaith work, too … we try to have meetings with people from other religions,” Haju said. “We don’t think Buddhism is the only religion on the planet or the most worthy.”

Involvement in the greater Ann Arbor community is central to the temple. Practice extends far beyond the services.

At lunch, I discuss the impact of the temple outside the stone walls with Haju and some of the temple’s congregants as residents. The great consensus is that it’s hard to tell the difference between their practice at Sunday services and in their daily lives.

Others commented on the joy that comes with having a community that you can both take from and give to. The temple clearly has a strong, often subconscious impact in the daily lives of its members. In their jobs, classes and social lives, the members said “mindfulness follows you everywhere.”

“This is not about some kind of monastery that has nothing to do with the secular world,” Haju said, in reference to the temple’s reach within the greater Ann Arbor community. “It’s about helping people so they can contribute wholesomely and ethically and artistically … to community and society.”

As much as the temple helps its members in their lives, it helps them equally in their deaths. Death is embraced as an important and necessary event in the lifecycle.

“We do not keep death under cover,” Haju said. “We try to be really open. It’s the nature of our existence; there isn’t anybody that doesn’t die. So if we embrace that we die it means we have to embrace that we’re living, that we’re alive, because it makes our lives so precious and important while we have them.”

That acceptance of death can be extremely painful and difficult and Haju acknowledges that. “It feels like, ‘What can we do?’ ” she said.

“So, during the time before that they die, we just do all the basic things — take them soup and take them to hospital appointments and do whatever needs to be done,” she continued. “And, then talk about this end of life that they are approaching and what they what to be done and how they want things to be.

“Usually it’s very calming for the mind and so there’s a sense of being able to relax with the journey.”

They aren’t afraid to “talk about this end of life that they are approaching” because honest conversation can sometimes be more comforting than warm soup or casseroles. “Usually (this conversation) is very calming for the mind and so there’s a sense of being able to relax with the journey,” Haju said.

For those left behind in the wake of a death, the temple does offer funeral and memorial services. It usually includes a photo of the deceased on the altar surrounded by small items of importance to the person; the community meditates and chants to help the deceased with their journey. Services continue in this manner for 49 days after their death.

"In Buddhism, we say it takes 49 days for the essence of a person to find its next rightful place in the universe,” Haju said. Services on the 49th day are commemorated as being the day the person’s spirit finds a new home in the universe.

These memorial services extend to the four-legged members of the temple community as well.

“Dogs have died and people of course love their animals,” Haju said.

Because, no matter what, death is really difficult and for many people a spiritual practice can help with accepting death. Especially when that spiritual practice is contained within a community like that of the Ann Arbor Zen Buddhist Temple. When the temple has these services for the sick, dying or deceased they are really, as Haju puts it, “sending compassion, sending strength and courage” to the living left behind.

The community of the Zen Buddhist temple manages to be extremely tight-knit and at the same time open, so new and old members alike feel comfortable to practice side by side. As

“The public is welcome to the temple on Sundays, and we certainly invite people who are interested or curious to come along,” Haju said. “And we’ll be happy to have them experience the service as well as answer questions and all of that.”

The Ann Arbor Buddhist Temple, no matter where you come from, takes you into its arms and lets you, even if only for a morning, experience the power of a purely accepting community.