River Falls, WI (USA) -- Paul Mullen considered himself a “nightstand Buddhist” for years -- that is, he read books and listened to podcasts and studied Buddhism on his own. But he’s not on his own anymore. 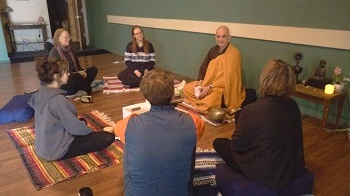 Mullen is a member of a new group called Karuna Buddhist Sangha of River Falls.

A sangha is a group of Buddhist practitioners. Karuna Buddhist Sangha meets on Sunday mornings for meditation at InBalance Yoga & Fitness, 216 N Main St., and on Tuesday evenings for Dharma study at the Unitarian Universalist Society of River Falls, N8010 Hwy. 65.

Mullen said the sangha has made a big difference in his life.

“Knowing there’s something right here in town, I don’t have to drive all the way into the ‘Cities,’ he said. “I have a sangha group of people that I know in my community, our small little town of River Falls.

“To have that in town, with people I know and associate with is really special, I think. It’s made a huge difference for those of us that are engaged.”

Mullen was raised in a protestant Christian tradition, but later drifted from the church. Over the years, he said he felt drawn to eastern religions and philosophies.

“So Buddhism, to me, just made the most sense. It’s what I enjoyed looking at and reading about,” Mullen said. “I think just the simplicity, the way it, in my mind, Buddhism is laid out, it’s just very understandable for me, and the way my mind works.”

Buddhism is a nontheistic spiritual practice based on the teachings of Gautama Buddha, also known as the Buddha. Buddhism is a 2,500-year-old major world religion.

The Rev. Shinko Rick Slone is a Zen priest who leads the Karuna Buddhist Sangha of River Falls. He was trained in San Francisco, at Tassajara Zen Mountain Center, and at Green Gulch Farm Zen Center. Slone has worked as a Buddhist priest in Salinas, Calif., and in Mexico.

He came to River Falls at the invitation of Robert and Michelle Smith. In August, the Smiths invited a group of people together who might be interested in forming a Buddhist sangha in River Falls for an informal meet and greet.

Slone said about eight to 14 members typically show up for Sunday morning meditation or for the Tuesday dharma seminars.

Sloan said Sunday mornings, the sangha first sits in meditation for about half an hour, and then he’ll give a talk after the meditation. The talk is similar to the idea of a sermon.

The Tuesday seminars start with about a five-minute period of silence. Then, Sloane presents material on the dharma -- teachings of Buddha -- and leads a discussion.

“Meditation as we practice it, is basically a stilling of the body, heart and mind,” Slone said. “Where for a period of time, we bring our awareness to just being present, dwelling in the present moment.”

Slone said people meditating try to “turn off” their “inner dialogue” and just be aware of their body, and breath.

That is mindfulness meditation. Sloan said the group also practices compassionate meditation. In that form of meditation, someone or something that needs loving support is chosen.

“That could be a particular person... or it could be, perchance, everyone in River Falls, or everyone on the planet,” Sloan said. “So we place them in our mind, we bring them into our awareness, and we think, ‘May they know happiness. May they know love. May they be free from suffering.’”

Mullen said his favorite part of the sangha is the other people.

“It’s been wonderful, and it’s still growing  as we grow and develop and kind of gel together,” Mullen said, “it just becomes more and more enriching, I think, and so it's been great.”

“For me my practice is really more of an action service,” Mullen said. “Doing what I know feels right and trying to live a life of compassion.”