RACINE, WI (USA) -- The room was festive, window frame and mantle adorned with tiny white lights, and if you sat too near the door you might have been distracted from the ceremony by the smell of the waiting feast. 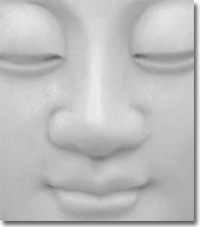 It comes every year at this time of year, the remembrance of an event which happened millennia ago.

"Because," said Linda Somlai as she stood at the front of the room, "2,500 years ago a man looked up at the morning star and got something."

Umm, no, it wasn't that man. It was the other one, the one who predated him (or Him), the man who began as Siddhartha Gautama and is remembered as Buddha. Sunday marked the day on which he became Buddha, which means one who is awake.

Buddha never did call himself enlightened, said Somlai, abbot of the Original Root Zen Center at the DeKoven Center. "He said, `I am awake,' " she said.

There was plenty of action on Sunday. Not only did the ceremony remember Buddha's awakening, but several people recited vows to mark steps on their paths of spiritual development. Those just beginning received prayer beads, copies of their vows, and bowls for eating at retreats, among other things.

Holly A. Johnson, 33, got a bell, among other things, to mark her ascent to senior reverend teacher, although it's not really an ascent as she sees it.

"When you're a teacher you just become a better student," she said. "What I hope to teach is that I don't have anything special."

All beings have the tools of enlightenment within them, she said after the ceremony. It's merely a matter of pointing people in the right direction.

Her title means that she will lead a class, will be consulted on issues that concern the center, but mostly it means that she should be prepared to help anyone at any time, to answer questions at any time. So that was her first test.

After reciting vows, she sat on a cushion and waited for members of the center who asked her questions. Sometimes Johnson replied with words, sometimes a gesture. Such challenges push students to reach beyond their comfortable and habitual points of view.

During the ceremony, advanced students received a slight burn on their forearms from an incense stick. "In that one moment when the flame touches you skin, all thinking is truly extinguished," Linda Somlai said. All focus is on that single moment, that single
sensation.

"Buddhists just try being present, moment to moment, and not be thinking, thinking, thinking, about me," Johnson said after the ceremony. "Because we find that a lot of self-centered thinking leads to suffering for ourselves and for others."

Another of the gifts Johnson received was a teacher's stick which, when placed in front of her on the floor, means she must speak the absolute truth.

"Can I try it out?" she asked after Linda Somlai handed it to her, and then bent to rap it once, sharply, on the floor.

"What does it mean?" Somlai asked.

Johnson touched her gently with the stick and said, quietly, "Wake up."