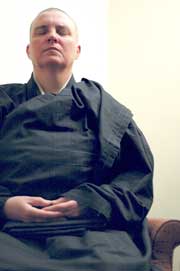 << KC WarEagle, who leads weekly Zen groups, is an ordained Buddhist monk in Athens. She meditates often, including this hourlong session at Galbreath Chapel on Wednesday. - Rob Hardin / Senior Photographer

WarEagle, which started as a nickname when she was younger and she later took as her last name, grew up near Green Bay, Wis. She began preaching to the neighborhood kids at a young age and always wanted to know the truth about Christian ideals, such as why to believe in God, she said.

“I asked those questions ... my dad would say ‘Don’t question things! Live on faith!’” WarEagle said.

Not satisfied, WarEagle decided many years later not to stay a fundamentalist Christian. While studying at North Greenville College, a Southern Baptist liberal arts college in Tigerville, S.C., she became a Pagan.

Her “whole world got turned upside down” when she learned that not everything she was taught as a child was the truth. “What do I believe now?” she said.

Paganism didn’t satisfy her search for religion. She enrolled in Southwestern Community College in Sylva, N.C., a few years later to pursue a degree in computer forensics. There she met a man in her class one day playing with a mala, a set of 108 beads used to recite mantras with. She asked him about the beads and he told her that he was a Buddhist, she said.

Shortly after, she found a teacher in Asheville, N.C., and within a week decided that she wanted to become a monk, synonymous for a priest or a nun in the religion. WarEagle did not want to be called a nun, because of the sexist label.

WarEagle became her teacher’s personal assistant, an Anja or Jisha. After a few years, WarEagle sold all of her belongings and moved to Iowa to attend the Ryumonji Zen Monastery.

People attending the monasteries don’t know how long it will take them to become a monk. Studies can last from three months to five years, she said. WarEagle was only at the monastery for three months before she was ordained in 2004.

After being ordained, WarEagle found out about the Susan B. Anthony Memorial Unrest Home Women’s Land Trust — a feminist land trust devoted to the education of women — in Athens, she said. WarEagle moved into a cabin at the land trust and soon met Berry Dilley of the Athens Center for Mindfulness Practice, 234 E. State St.

Zen Buddhism and mindfulness can be applied to everything, said senior Craig Pinkerton, president of the group. Mindfulness is all about being aware of what’s really going on. Pinkerton, an English major, began studying Zen Buddhism as a student in Hartley’s English 250 class, which studied Zen poetry and writings.

Sophomore Victoria Alt, also an English major and the group’s secretary, began studying Zen Buddhism to “keep my feelings in check,” she said. It has taught her to live in the moment and “helps me keep things in perspective,” she said. Although Catholic, Alt practices Zen Buddhism ideals and considers her Zen practicing a sector of her religious beliefs.

OU student organizations must have 51 percent of its members be students. At the time, there was more of a community interest so WarEagle formed the Athens Zen Group as well, Pinkerton said.

The OU Zen Group meets every Tuesday from 7:30 to 8:30 p.m. in Ellis 205. The Web site for the Athens Zen Group Web site at www.athenszencenter.org.