RACINE, Wisconsin (USA) --­ When you're a growing religion, you get more space. The Original Root Zen Center isn't close to erecting a megachurch with a few acres of parking lot. But this year, on Sunday night, it traded its cramped second-floor room at the DeKoven Center for the Great Hall as the venue for its enlightenment ceremony. 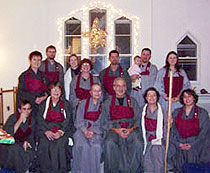 The ceremony marks the day, actually the morning, when Siddhartha Gautama became a Buddha, which means someone who has awakened.

"It seems like the last few years we've had a few more young people starting," said Linda Somlai, who with her husband Tony serves as abbot of the center. There are four new babies in the center's membership, she said. The youngsters are brought to meditation, too, and while that may seem a distraction, it isn't; Somlai said the meditators have learned to accept that different sound.

Part of the Enlightenment Day ceremony involved those new members. They stood and recited their precepts, a list of promises made to the community about their practice of Buddhism. It's not necessary, Somlai said. Some people have attended the center for 15 years without doing so.

But it was something that Darin and Bethany Zimpel wanted to do. Darin didn't have a faith before joining the center. Bethany did.

"My whole life, ever since I had a class in college, I've been interested in Buddhism," said Darin, 39. He felt like a Buddhist, agreed with the teachings he knew of, but never acted.

"There was a lot of death in my family about a year ago, and it kind of got me looking for something deeper," Darin said. His voice broke a bit and Bethany took his hand. "And I found this. It makes sense. It just makes sense."

"And as soon as we came to the Zen Center, everything just clicked," he said. To go somewhere where peace and love and caring is the main concern, that's just such a wonderful thing."

Bethany, 36, was raised Catholic but didn't practice. She connected with some Christian teachings, such as the importance of helping others. "I never identified with that faith base where you're doing something for a certain outcome for yourself."

When Darin decided to attend the center, he asked her to come with him. "I had spiritual beliefs, but never put a name to them. When I came to the Zen Center I said `that is exactly what I've been following and what I believe in.' " So they stood and publicly made their promises. In their case it was five vows (more advanced practitioners add to that list) to develop compassion, transform suffering into love and peace, help all beings, heal and nourish those in need, and extinguish desire, anger and ignorance.

There were many bows, of course, bows tipping the body forward from the waist and bows in which participants knelt and touched their heads to the floor. There was a golden figure of the Buddha at the front of the room, but all the bowing didn't make the statue an object of devotion, Linda Somlai explained to the audience.

The statue is not even really a person; it's a mirror, Tony Somlai said.

"That's a reflection of who we're supposed to be."