Chicago, IL (USA) -- He calls himself a simple, Buddhist monk, and his positive message drew thousands of people out Sunday to Millennium Park. 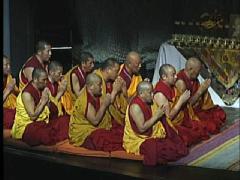 The Dalai Lama, exiled since 1959 when the Chinese took over Tibet, is still fighting for freedom but focusing on philosophy during two talks he gave to large crowds in Chicago.

Buddhist monks set the tone, and crowds filled the park before the Dalai Lama and his quiet dignity took the stage. He had good wishes for all, including Maggie Daley, the mayor's wife.

"Hello brothers and sisters," he said to address the crowd.

No matter their faiths or beliefs, those in attendance said they realized they were in the presence of a holy man.

"You get a sense of humility that you're in the presence of people like that," said attendee Reggie Dunlop.

The spiritual leader of Tibetan Buddhism shared thoughts on what he called "finding inner peace in a world of turmoil."

"In spite of difficulties, many obstacles, remain hopeful or with optimism, with courage, with self-confidence. Then, the person can be a happy person," he said.

Believed by followers to be the 14th reincarnation of the Buddha of Compassion, his message struck a chord.

"I think the essence is about living your life in the right way and in an altruistic and compassionate way," said attendee Sonya Jackson.

"It was just really grounding to be in the presence of someone that's enlightened but yet also compassionate and understanding of other people. It was just a really good lesson," said Beth Aldrich, who was also in the audience.

The Nobel Peace Prize recipient also spent time with 300 Tibetans now living in Chicago. His next trip is off to Australia, NBC5's Sharon Wright reported.