One of the largest Cambodian Buddhist temples in America opened its doors this weekend in Hampton, in Dakota County. Monks and visitors from around the world flew in to attend the four-day consecration ceremony.

Hampton, Minn. (USA) -- The temple sits on a hilltop surrounded by miles of cornfields and horse farms. 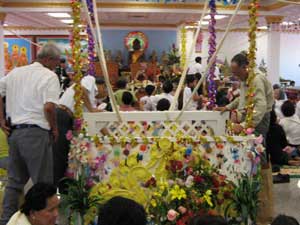 On this day, it's surrounded by cars. Thousands of Cambodian Buddhists from around the world have come to tiny Hampton for the consecration celebration for the temple, called Watt Munisota.

"This kind of celebration, it happens only once, so it is very rare even in the community. That's why it's very important," says Yanat Chhith, the board president of the Minnesota Cambodian Buddhist Society.

He says the ceremony is rare, performed only for the inauguration of a new temple and sometimes the renovation of a very old one. The Sima Boundary Ceremony begins with prayer and chanting. It culminates with marble stones, each weighing more than 400 pounds, being placed in formation around the temple. The stones were brought from Cambodia to mark the holy boundaries of the temple ground.

Inside, some of the faithful sit barefoot on the floor and pray as a monk preaches the teachings of the Buddha. In the middle of the room is a hole marking the very center of the temple.

Visitors stuff donations into the hole, called a Sima, to help pay for the temple construction. Volunteers collect the donations. They bundle the gifts into large plastic bags to make room for one of the marble stones.

The design of the temple is drawn from Buddhist teachings. There are wheels of life representing the path out of suffering. The walls are decorated with the story of the Buddha's path to enlightenment and the Buddhist philosophy of moral virtue.

Downstairs is a social hall and upstairs is the sanctuary where monks will pray and meditate. Nearby is a house where seven monks will live.

The $1.5 million temple took five years to build. The Minnesota Cambodian Buddhist Society purchased the 40-acre site so there would be enough room for big celebrations, which generally attract people from around the state.

It is estimated that between 6,000 and 9,000 Cambodians now live in Minnesota, the sixth-largest Cambodian community in the country.

Many of the first Cambodians came as refugees escaping the Khmer Rouge in the 1970s. That regime tortured and killed millions and it set out to destroy religion and outlawed Buddhism.

Many of the monks killed during that time are memorialized at the temple.

Ramsey County Deputy Sheriff Tony Pich is working at today's event. As a Cambodian who came to the U.S.with his family to escape political persecution, the day holds special meaning.

The temple brings up a lot of sad memories for him. But he says he hopes the new temple will help preserve Cambodian culture in the United States.

"A lot of kids that grow up over here, they don't know much about the culture and also about the tradition," Pich says.

Pich says he hopes the temple will help form a bridge of understanding between Buddhists and people of other faiths.

"Definitely, yes, it will teach young kids, teach other people who never had the chance to learn. So this is it, this is the time," he says.

At around 2 p.m., the emcee announces the start of the sacred Sima ceremony. All non-monks must clear out of the temple. The building is roped off and guards watch to make sure no one crosses. If that were to happen, the ceremony would be ruined and they would have to start again.

The monks inside begin the traditional Sima chant to bless the temple. Outside, people huddle in any available shade to listen. Many older people pray.

University of Minnesota history professor Erika Lee says Minnesota's Southeast Asian community is unique because it was founded largely by refugees. But as the American-born generations that followed continue to establish themselves, she says it will be interesting to see how the culture changes and becomes more American.

"We see this all the time with different immigrant groups, the mixing of old and new and the choices that different groups make in terms of what to retain, what to change, what to abandon," says Lee. "I see this as just another chapter in that larger story."

The consecration ceremony itself mixes old and new. Along with Eastern religious traditions, the event culminates in a very Western ribbon-cutting ceremony.