Hampton, Minn. (USA) -- Situated in the rural lands of Hampton, Minn., the golden spires of the Watt Munisotaram Temple stood out against a sun-soaked backdrop of blue sky and green prairie Saturday. 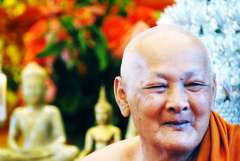 << Amanda Schwengel
A Buddhist monk sits at the celebration of the Watt Munisotaram Temple consecration.

The temple held an open house July 5 through July 8 to celebrate the consecration of the building. An estimated 7,000 people, including University students and 118 monks from Cambodia and around the world attended.

Chanda Sour, vice president of public relations for the event, said there was a festive atmosphere outside the temple.

"It's a change of scenery. If you blinked and you passed it you didn't know there was a big celebration out in the back," he said. "That's what makes it unique, and we want it that way."

The ceremony included a blessing of the Buddha image as well as the placement of the Sima boundary, which marks the sacred ground surrounding the temple.

The event was the culmination of a process that began in 1988, when the land the temple is situated on was purchased. The final cost of the project is estimated to be $1.58 million.

The consecration of a new temple is something that occurs rarely in the Cambodian Buddhist tradition.

A new temple can only be blessed once.

"It's not often that things like this happen, and that's what makes it so important," Sour said. "I'm 34 years old and this is my first time seeing an actual inauguration of a temple."

Sour said the design of the temple was also part of the reason people were interested in the event.

"It's actually the architecture; the layout looks and feels like a temple in Cambodia," he said. "It is a big event when you got a perfectly built temple like that."

At the event, attendees gathered outside the temple to offer rice and money to the monks.

Chamreun Tan, member of the Cambodian Buddhist Society, said giving to monks is a cultural tradition.

"The Buddhist monks must come every day to get a donation from lay people so they can survive," he said. "Buddhist monks do not get paid like priests or other religions; they live through donations of the community."

Tan said a celebration like the one held last weekend is a tradition in the Buddhist religion whenever a project is completed.

"Normally when you finish a big building like this, in the Buddhist religion, they always have a special occasion," he said.
feature 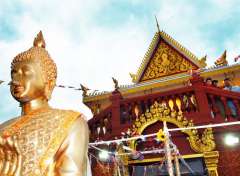 Amanda Schwengel
The consecration of the Watt Munisotaram Temple was attended by an estimated 7,000 >>

people and 118 monks from Cambodia and around the world.

"It's similar to Americans; they do open house before people start to use the building." Tan said he was happy to see how many people came to the event, especially from outside the Cambodian community.

"We don't discriminate (against) anybody … as long as they understand we practice peace," he said. "That's what we want; we don't want to have anything else."

Sarim Pin, medical science sophomore and president of the Cambodian Student Association of Minnesota, was at the event with about 15 other members to raise money.

The association was fundraising to send money for relief to Cambodia by April 2008.

Pin said she was surprised by the number of monks present at the event and how far they traveled to get there.

Pin said she also noticed the diversity of those who came to the event. It's just amazing to see the different people that came," she said. "Saturday was the best day because a lot of people came … I've been there before and I've never seen that many people."

University graduate Sam Tan had family members from as far away as France and Chile come to Minnesota for the event.

Sam Tan described the atmosphere around the temple as "kind of like a little county fair," complete with vendors selling food and other goods.

Sam Tan said although the event is a celebration for the temple, it also helps raise money.

"The biggest thing is it's kind of like a fundraiser for the temple," he said. "Other than that it's been a big party."

Sam Tan said the event is important to the culture in general and to devout Buddhists. "(On a scale of one to 10), religiously, it's about 100," he said. "I mean I'm not even heavily Buddhist, but this is so big in the culture, and it's kind of a social gathering."

Sam Tan said the process of getting a temple blessed can be difficult because the events are so rare.

"Pretty much you're politicking your way with the big temples back home," he said. "We weren't officially a temple until now. There are temples all around the world that want to have this. We're lucky."