WILLIAMSVILLE, IL (USA) -- Tucked in the second floor of an unsuspecting barn is an eye-opening display of bright colors. 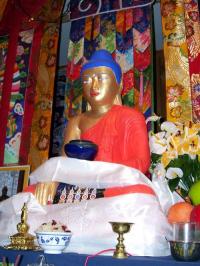 << A sculpture of Buddha sits in the room where Khensur Jampa Tegchok Rinpoche, a Tibetian monk, spoke in Williamsville on Friday. Photo: Patrick J. Crowley/Reformer

Candles provide flickering light for glimmering statues and portraits while subtle incense rises from the floor. Flashy tapestries dominated by reds, blues, yellows and golds hang from walls and the ceiling.

Two portraits of a smiling Dalai Lama put a familiar face in the relaxing room.

Years ago, this space was built as an antique barn. Since November, a group of Buddhists have been running the Thosum Gephelling Institute for Buddhist Studies, a spiritual center that is now celebrating its one-year anniversary.

The name Thosum Gephelling means "a place to learn to increase and expand one's virtue," according to TGI's Web site, and that is what its leaders and teachers strive to do.

The past week has been particularly special for the institute while it celebrates its anniversary. To celebrate the occasion, a respected Tibetan monk has been giving talks, spiritual lessons and Buddhist services all week.

He has been a monk for 70 years (he's 77) and is one of the most revered scholars of Buddhism today, according to Gary Keiser, one of the institute's founders who serves as president and CEO. He is the author of many books and was appointed by the Dalai Lama to be abbott of Sera Monastery, which has about 4,000 Tibetan monks in exile.

On Friday, he was comfortably seated in front of a crowd of about 25 onlookers, some casual guests getting a glimpse of a different culture, some spiritual followers of Buddhism.

Tegchok sat on a platform, his legs folded and his arms relaxed in his lap. He expressed himself with laughs and smiles as his teachings were expressed through a translator.

He spoke of love, kindness and compassion, echoing the Buddhist tradition and sharing stories that have passed through generations in Tibetan monasteries.

The bits of wisdom he expressed seemed endlessly profound, but at the heart of his message, he was simply trying to tell how a person can live happily.

Treat others with love and compassion and it will be directed back at you. When harm comes, instead of responding harshly, respond with compassion and the harm will be reduced.

If one can establish a strong sense of compassion, it can lead one to enlightenment. But it wasn't always just him (and the translator) doing the talking. At times he asked for input from the crowd of silent onlookers, some seated on pillows placed on the floor, some in chairs.

Everyone got a copy of some of the prayers and translations that were chanted and recited at the beginning of the talk. Many in the crowd had clearly been there before and were comfortable with the service, others were just happy to watch it all happen.

"It's sort of steadily growing," said Keiser. The institute started with just a handful of people at first and over its first year has accumulated more people. Today, it has about 30 regular members.

The small, steady growth is just what Keiser envisioned.

But being the only Buddhist center in southeastern Vermont, the type of teaching it specialize sin has to take into account the variety of religious backgrounds that people walk in with.

"I don't like to change (people's) religions," said Geshe Ngawang (Geshe-la), the spiritual leader and teacher of the institute. He said that all religions are essentially the same at their root -- teaching people to become calm and peaceful.

When Geshe-la sees people walk through the doors of the institute, he sees worry. He sees stressed people with much on their mind.

What he wants to happen when they sit in at a service or just drop in for a talk is to not think as fast, calm their nerves and become happy again. The institute isn't there to convert someone to its religion.

Geshe-la said he especially likes to see young people come in. He described the teaching of the younger generations as a tree grows. A young, small tree can be straightened out and made to grow up tall. If a tree grows old and crooked, there's no way to straighten it out.

Keiser said one of the next steps the institute is looking toward is more public events like live music.