Bloomington, Indiana (USA) -- After two years of financial struggles, the Tibetan Culture Center, 3655 Snoddy Road, has paid off its debt. The announcement came Thursday afternoon in conjunction with another announcement outlining the visit of the Dalai Lama in October. 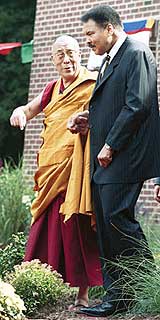 << The Dalai Lama speaks with Muhammad Ali Sept. 8, 2003, before the dedication of the Chamtse Ling. The spiritual leader will be making another visit to Bloomington this October.
IDS File Photo • IDS

The Dalai Lama’s older brother, retired IU professor Thubten Norbu, founded the center in 1979. The center was almost auctioned off in 2005 after it incurred more than $1.7 million in debt. It escaped being auctioned, and in June 2005 the Dalai Lama brought in current Director Arjia Rinpoche to rehabilitate the center. Rinpoche requested that the Buddhist spiritual leader visit this fall for his fifth visit to Bloomington, in order to help the center and its teachings be more well-known in the community.

During his visit, the Dalai Lama will hold teachings between Oct. 24 and Oct. 27 at the IU Auditorium and give a public talk at Assembly Hall on Oct. 27, which will be hosted by Elaine Irwin-Mellencamp, the Tibetan Culture Center vice president. The Dalai Lama’s visit will come after he is awarded the Congressional Gold Medal of Honor at a ceremony Oct. 17. The focus of his teachings will come from a book by Atisa Dipamkara Shrijnana, an ancient Buddhist teacher, titled “Lamp for the Path to Enlightenment.”

While there are 325 million Buddhists in the world, Tibetan Culture Center treasurer Sudhaka Koneru said the benefits of the Dalai Lama’s visit won’t apply only to practitioners of the philosophy.

“You don’t have to be a Buddhist to learn the teachings,” he said. “How many times do you get this opportunity?”

Arjia said there will be other cultural events taking place in Bloomington for the Dalai Lama’s visit, including Tibetan and Mongolian dancers, various artists from around the world and scholars who will give talks.

Koneru and Arjia said they were excited to be debt-free when a group of anonymous donors relieved the center of its debt after the Dalai Lama called upon his followers to help the center. Arjia said the center has high hopes for its future plans.

“In the future, the center hopes to make close connections and exchanges with IU and other universities,” he said.

Arjia added that the center is undergoing renovation in anticipation of the Dalai Lama, who will be staying there during his visit.

Sophomore Julia Long said she thinks the Dalai Lama’s visit will be an exercise in diversity.

“I don’t really know much about the Dalai Lama,” she said. “But it’s good that we’re having different religions represented (in town).”

Tickets for all six sessions at the IU Auditorium can be purchased from the auditorium for $275. Beginning Oct. 2, IU students can purchase single-session tickets for $25. The cost is $50 for non-students.