Bloomington, IN (USA) -- The city attorney in Bloomington, Ind., has accused a group of Christians of using their beliefs as a "political tool" for next month's city elections. 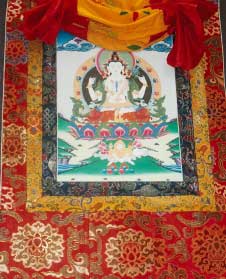 City attorney Kevin Robling told WRTV in Indianapolis he thought it was a "shame" for the Christians, who objected to the city's promotion of Buddhist religious articles without any balancing Christian items, to act this way.

"We've got an election in 18 days," he told the station. "I think what you've got is a group of people who are using their religion as a political tool."

However, he did not explain how such beliefs could be converted into a "political tool" or create a political impact, nor did he get agreement from the Christians, who have objected to the city's promotion of the Buddhist display as part of its publicity for a coming visit from the Dali Lama.

The group of Christians last week, as WND reported, took a stone sculpture of the 10 Commandments to city hall and placed them there in order to include Christianity with Buddhism in the religious beliefs being promoted by the city.

City officials took them down immediately, describing that act as a violation of the First Amendment, because the Christians did not have permission to place the limestone sculpture there. They also described the Buddhism display as art and culture, not religion.

Indianapolis resident Shirley Douglas told the station the Buddhist display is "totally religious in nature." And a lawyer who has offered the group preliminary guidance said an option would be for the group to ask the city to provide the same accommodations for Christian information as it provided for Buddhism, and see the results.

But Amy Bernitt, one of the group objecting to the Buddhist display, told WND the group would review their advice and decide soon how to proceed, because they don't have any inclination to let the issue drop.

The lawyer, who is affiliated with the Alliance Defense Fund, told WND that while she is not formally representing the group at this time, her advice has been to make a request for the same public display of Christian items as that given to Buddhism.

"Something in keeping with what the city allowed the Tibetan Cultural Center to do," she said, noting that with the display, it appears the city has opened a "limited public forum" and now is not allowed to discriminate against any religion.

A city official told the Christians that she had decided the items were art, not religious, as part of the city's rejection last week of the request for equal time for Christian symbols and representations.

The dispute arose over a display of Buddhist items in Bloomington city hall. The 10 Commandments tablets were delivered and set up by a volunteer team of Christians after city officials refused to respond to the group's multiple telephone and e-mail requests about the procedure used to erect the Buddhist display.

At the installation of the Christian symbol, according to the local Herald Times newspaper, Jim Billingsley read a statement explaining what was going on.

"These commandments are our symbol of peace, and we want to include them with the city's display to promote religious enlightenment. We want to be clear that we do not agree with the ideology of the Dalai Lama or Buddhist beliefs – we are Christians and believe in one God, our Lord and Savior Jesus Christ," he said.

Deputy Mayor James McNamara was in attendance, but declined to participate, telling Bernitt he had been assigned to observe the situation.

He denied the city promotes one religion over another, saying instead the display of the statues of Buddha and the other religious artifacts are, in fact, "cultural."

Bernitt said the Ten Commandments also are cultural, and artistic, since they were carved from limestone, for which the Bloomington area is famous.

Kruzan earlier told the newspaper the Ten Commandments weren't being allowed because the installation "followed no process and does not constitute a work of art."

In his announcement promoting the Buddhist display, Kruzan said there would be a ceremony "with His Holiness, the 14th Dalai Lama" at the Tibetan Cultural Center.

"We look forward to His Holiness' visit and this special ribbon cutting event, which will be open to the public," he said.

The display, according to the city, features photographs and craftwork of Tibet. "Also on exhibit are religious cloth paintings or thangkas and photographic scrolls featuring images of Tibet," the city said.

There also is a "Peace Tree" in city hall, where the public "is invited to write their 'peace wishes' on the paper strips and tie them to the tree branches," the city announcement said.

The Christians simply said that those actions opened the door to all religious materials, and their beliefs have just as much right to space in city hall as the Dalai Lama's.

Michael Douglas, a pastor at Pentecostal Faith Assembly, told the newspaper he wants an equal voice for his beliefs. "He (Dalai Lama) lost his voice in his country, (we) don't want to lose our voice in our country," he said.

In an e-mail, Billingsley told WND that in addition to the promotional display about Buddhism, the city is placing Dalai Lama banners on city street poles and publishing articles about the philosophy of Buddhism in a city funded magazine.

He said the installation ceremony for the Ten Commandments was brief.

"I read a brief statement on the importance of the Ten Commandments being the bedrock on which our city and nation's cultural and legal foundations stand," he wrote. "We then proceeded to take two stone tablets of the Ten Commandments (each about 2 ft. tall and 1 ft. wide) and a table inside city hall and placed them right in front of the city's religious display of Buddhism."

"Shortly after we left, the city had the Ten Commandments removed. There is an obvious endorsement of one religion, and the deliberate exclusion of another going on here by Bloomington's city government," he said.