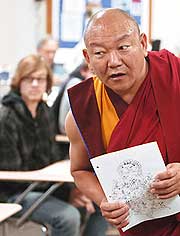 Lhunpo told the class Buddhism is becoming more popular because of its openness. It “goes well with other religions,” he said, comparing religion to a buffet of choices.

His visit was part of Frissell’s series of guest speakers, who also include Robert Baum, who provided information on indigenous African religions; Vellore Gopalaratnam, who explained Hinduism; and Philip Clart, an MU religious studies professor who plans to speak on Confucianism.