Terre Haute, Ind. (USA) -- April Tucker, a sophomore pre-law major and explorer of the Buddhist doctrine, grew up as a Jehovah's Witness. Her mother married a Muslim; her best friend is an atheist, and her boyfriend is a Catholic. 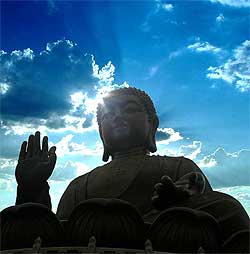 "Being able to be exposed to several different religions in such a close proximity gives people such an opportunity to compare views and decide what path is the correct one for them is the most important part of being in a religion or being nonreligious," Tucker said.Tucker said exploration of religions leads to enlightenment and embrace of various beliefs.

"I don't think it's important in religion to end up in one certain place or with one certain set of beliefs, but rather it's important to make the effort to concentrate on improving your life that you live here on Earth and not focus on the life-after-this-life aspect," Tucker said.

Larry Tinnerman, an assistant professor of curriculum, instruction and media technology, said Buddhism, more of a philosophy and way of life than a set religion, is integrated in the form of spirituality in people's everyday life.

"While I study and practice the spirit of what Buddhism has to say, I am a practicing Christian," Tinnerman said. "I have found that much of what is said and discussed here helps to fulfill my life as a Christian more fully."

Brian Morton, a professor in the department of philosophy, said Buddhism is a religion with a number of branches. Buddha taught that the central problem of human life is "dukkha" roughly meaning "suffering."  He taught that suffering is caused by "tanha," meaning thirst, craving or addiction.

"It is because we crave things to turn out a particular way that we experience suffering when they do not," Morton said. "In particular we crave good things continuing forever, but all things change, so we are nvariably disappointed when the good things in our life cease or change. "

Morton said Buddha taught that people can cease suffering by diligent practicing of the "Eightfold path" which would gradually lead people to accept what happens, rather than wanting things to be a certain way.

"It is my contention that the spirit of Buddhism is more a philosophy rather than a religion," Tinnerman said. "We have images of orange-robed monks sitting around all day chanting in incense-filled temples, and yet the spirit of Buddhism does not demand living outside of the world; it only asks that we find within the rush of daily life that moment where we can be still enough to listen to the whisper of what the universe has to say to us."

Morton said Buddhism teaches of three root evils: greed, hatred and delusion.  It teaches of compassion for all humans to remove hatred. It recommends caring for others and cultivating detachment from worldly things.

"It is my thought, based on Buddhist tradition, that one must never close their eyes on any night without answering the question: 'What things did I do today that were significant?'" Tinnerman said. "By significant, I do not mean big, I mean meaningful.  What new thing did I see today?  What humbled me today?  What gave me joy?  What did I do to bring that joy to others?"

"Where religion often tries to restrict thought, Buddhist tradition tries to stimulate it and free it," Tinnerman said. "In actuality, Buddhism can exist with virtually any religion doctrine in the world.  It is unfortunate that those various doctrines will not exist with Buddhist thinking."

Chris Marts, an Indiana State alum who was raised Baptist Christian, found the religion left too many unanswered questions. He eventually turned to the Buddhist philosophy.

"I've studied most of the religions in the world," Marts said. "The Western faiths follow a similar monotheistic routine. Buddhism attracted me because it's a logical religion. It's more philosophy injected with religion. It ultimately won me over with the Buddha's instruction to choose a local dominate religion over the Middle Path if that's what makes more sense. I feel it's extremely bold of a leader to encourage people to examine the other prospects instead of blindly following one faith."

Morton said that unlike the major Western religions, Buddhism does not emphasize on a god.

"I am religious, but I feel that most religions don't offer me what I need," said Pete Brandon, a freshman open preference major. "Buddhism strongly exemplifies its core values of achieving my own internal happiness. I feel that is better than blindly following the words of others. I want to walk my own path in life not walk someone else's."

Though there are not any major centers for Buddhist faith in Terre Haute, the First Unitarian Universalist Congregation is a nondenominational church that welcomes all faiths, including Buddhist philosophers.