Ann Arbor, MI (USA) -- The United States and other wealthy countries need to downscale their lifestyles and try to focus more on inner contentment, the Dalai Lama said today. 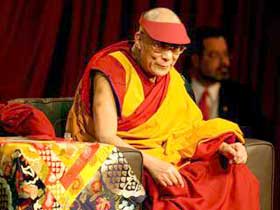 There simply aren’t enough natural resources on the planet to support all 6 billion people on Earth imitating Western lifestyles, which consume large amounts of water and electricity. Because there are limitations on external material resources, but not on internal ones, it’s better to seek contentment and peace rather than material things, he said.

The Dalai Lama, the head of the Buddhist church, gave two lectures today at Crisler Arena in Ann Arbor, one on Buddhist texts and, in the afternoon, a lecture on the environment sponsored by the University of Michigan. Both were attended by more than 7,000 people.

Outside, about 600 to 700 people protested, university officials said, most supporting the Chinese government and the Olympics.

The scene inside Crisler Arena was slightly surreal, as video of one of the world’s religious leaders with his hands folded was projected on an overhead scoreboard, surrounded by ads for Mountain Dew, AT&T and Meijer.

All people need to take responsibility for the environment in their daily lives, doing what small things they can to make a difference, the Dalai Lama said. He said he showers instead of taking baths, which conserves water, and turns out the lights when he leaves a room. "It’s a really serious matter," he said.

He said although environmental problems like pollution may seem insurmountable, changes over the last 30 or so years have given him hope.

"What he says is simple and beautiful," said Mark Phillips, of Wyandotte, who celebrated his sixth anniversary with his wife, Beth Phillips, at the lecture. "Not enough people hear his message."

Among those on hand for the lecture were former U-M football coach Lloyd Carr and Bill Ford, chairman of Ford Motor Co. Actor Richard Gere was in the front row for the morning teachings, clasping his hands in prayer at times and prostrating himself on the floor as the Dalai Lama entered.

In the morning session, the Dalai Lama urged listeners to cherish others rather than themselves.

He sat cross-legged on stage, wearing a visor to protect his eyes from the bright lights, talking about the purpose of life, which he said is to live happily.

Happy lives happen when people are altruistic and compassionate toward others. Money and power will not bring happiness, he said.

"Many sufferings are result of cherishing one’s own self interest," he said. "You must cherish others in the same way you cherish your own body."

Outside Crisler Arena, Yanqin Shen, a post-doctoral fellow in virology at the University of Michigan, was wearing a T-shirt supporting the Olympics. "We want people to hear another side," she said. "The Chinese are not enslaving Tibetans."

She said the Dalai Lama and others are using the Olympics to put pressure on China, which is unfair. "The Olympics belong to the whole world," she said.

Gen Wu, professor at Wayne State’s medical school, said despite the fact the Dalai Lama says he supports the Olympics, his actions don’t show that. "He does not condemn the actions" of those protesting the Olympic torch at rallies where the torch appears.