Madison, WI  (USA) -- After more than thirty years as an architect, John Martens had been in these types of meetings before. Difficult conversations where he would have to tell one of his clients that despite everyone's commitment and best intentions, a deadline could not be met. 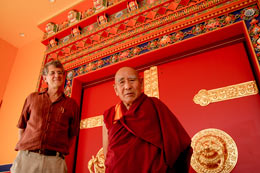 But this was no ordinary project, and no ordinary client. Martens would have to tell Geshe Sopa, founding abbot of the Deer Park Buddhist Center, that his longstanding dream for a traditional Buddhist temple would not be ready on the projected completion date in 2007. More importantly, it wouldn't be completed in time for the Dalai Lama to deliver a formal consecration during his trip to Madison.

For Martens, these testy situations have always called for a little humility along with the agility needed to run and duck. But the response he received from Geshe Sopa embodied the Buddhist ethos and underscored the Dalai Lama's close relationship with Geshe Sopa and Deer Park.

"After we told Geshe Sopa it wouldn't be ready, he immediately got an ear-to-ear grin and said, 'I just want to thank you people for working so hard on this,'" says Martens. "That's what this project is all about. It's a total inspiration."

Geshe Sopa had no way of knowing that the fourteenth Dalai Lama, Tenzin Gyatso, would be back again just one year after his last trip to Madison from India, where Tibet's political and spiritual leader has lived in exile since 1959. But on July 19, he will be here, and the occasion will mark an astonishing fifth official visit by His Holiness since 1979.

An iconic figure whose worldwide influence belies his humble calling as Buddhist monk, the Dalai Lama is a Nobel laureate and recipient of the Congressional Gold Medal, and he frequently spends his days zigzagging between countries to consult with dignitaries on political, religious and economic issues of the day, including the current unrest in Tibet that erupted in March. Amid all of this, Gyatso's journeys have again and again set him on a path leading back to our community, back to the uniqueness of Deer Park and its new temple, and Geshe Sopa's role in fostering its vision.

The Deer Park Buddhist Center sits high on a hill in the Town of Dunn, just south of Madison. To visit Deer Park, you have to travel down a two-lane county highway that cuts through the countryside passing cornfields, a horse stable and unadorned family homes. If you're not looking for the turn, it's easy to speed right past.

The centerpiece of Deer Park is the nearly twenty-thousand-square-foot temple built in traditional Tibetan style that incorporates stunning handcrafted woodwork, metalwork and symbolic elements such as lotus flowers and wish-granting jewels. By any definition, this is no ordinary building. The Buddhist monastery and teaching community not only attracts students and devotees from around the globe, but has also become a treasured place for the Dalai Lama himself. To Geshe Sopa, it is the realization of a sacred ground in America that preserves Buddhist teachings, literature, art and architecture as well as a way to help sustain his Tibetan homeland's culture in the face of diaspora.

Even at a very early age, Geshe Sopa was considered an extraordinary Buddhist scholar. He was chosen as one of the examiners who tested the young Dalai Lama as he was completing his studies. In the early 1960s, Geshe Sopa moved to the United States at the Dalai Lama's personal request. His Holiness asked him to lead a mission of spreading the Buddhist message cross-culturally.

After a brief time on the east coast, Geshe Sopa moved to Madison to accept a teaching position at the University of Wisconsin--Madison. Here he was named professor emeritus and became the first Tibetan tenured at an American university. But in spite of these professional accomplishments, as with the Dalai Lama, Geshe Sopa's first calling is that of a simple monk. More than anything, Geshe Sopa wanted to create a lasting gathering place where people could study Buddhist teachings outside of the university setting. When asked why he's here, so far from public view, his answer is perfect in its simplicity: "The land was on sale, so I bought it," Geshe Sopa says.

When speaking with nearly anyone associated with Deer Park and the Dalai Lama's visits, there is an undeniable reverence, but it is impossible to find even a hint of self-importance. This is not surprising when one explores the basic tenets of Buddhism.

Buddhism exists somewhere between religion and philosophy, and even those who study it do not agree on a perfect classification. In fact, the Dalai Lama himself has taught that if a person has a religion to which he already subscribes, he should not feel compelled to abandon it for Buddhism. If there is something in Buddhism's teachings that interests a person, she should by all means adapt and incorporate it into her daily life. But no one should ever feel any pressure to follow a doctrine that doesn't work personally. And while strict Buddhists believe that the Dalai Lama is an enlightened being who has postponed his own nirvana to serve humanity, Buddhist teachings as a whole are inclusive and focus on achieving enlightenment through the practices of meditation, awareness, compassion and tolerance.

"It Will Not Rain"

Ani Jampa is a Buddhist nun and Sopa's full-time administrative assistant. Born Alicia Vogel, she was one of Geshe Sopa's teaching assistants before joining Deer Park. She dresses in the same maroon and yellow robes as the monks and wears her dark hair shaved close to her head. When she talks about Geshe Sopa, there is a passion in her words that put Geshe Sopa's achievements and relationship with the Dalai Lama into a context the humble Geshe Sopa shies away from.

"Geshe Sopa has done so much in his life. His Holiness [the Dalai Lama] has great respect for him," she says. "Teaching in the American academic system is unheard of for Tibetan lamas."

Penny Paster has been volunteering for Geshe Sopa since 1977 and has served as primary coordinator for most of the Dalai Lama's visits to Madison. Her husband, Dr. Zorba Paster, is the point person for medical care should His Holiness need to see a doctor while he is in the United States.

Each is involved with the Dalai Lama to a degree most people never experience, but neither views their roles with any heightened importance. Things need to be done, so they do them, they say, just as anyone in their position would do. And like so many others whose lives have been touched by the spiritual leader, they spend less time contemplating the whys and more on being grateful that he does, in fact, have these strong ties to Madison.

"His Holiness feels very much at home here. He loves driving through the country and stopping to pick flowers," Penny Paster says. "We've seen again and again that the serenity and peacefulness of Deer Park is very important to him. It's a living, breathing monastery. We don't question it; we're just so thrilled."

Martens is not a practicing Buddhist, but he has long been interested by its teachings. As a result, he originally signed on with the new temple project as a volunteer construction consultant but later became the primary architect for the construction phase. After three years, he has traveled to India and invested innumerable hours of research, all with the goal of being mindful of Geshe Sopa's hopes for the temple. He has also experienced things he cannot explain.

Last fall, Martens was contacted by Deer Park on a Thursday and told that the following Tuesday would be a propitious day. They requested that certain ceremonial roof ornaments--which had not been scheduled to be installed for weeks--be put up by the following Tuesday. To further complicate matters, that day's forecast called for heavy all-day rains.

So on that Monday, Martens called Deer Park to tell them he didn't think it would be possible to complete their request. He was told to wait. After five minutes, a voice came on the line and spoke four words: "It will not rain."

Tuesday morning, it was pouring. By the afternoon, there were no clouds in the sky, and the ornaments went up without incident.

Martens shrugs when the incident is brought up. "I have seen things happen here that make me appreciate the depth of this project," he says.

This July the temple will be finished, and the Dalai Lama agreed without hesitation to return again to perform the dedication. On the eve of completion, Martens knows he has been part of something few people ever get to experience.

"I can't believe how lucky Madison is to be in this situation."