Madison, WI (USA) -- The Dalai Lama in a private audience Tuesday thanked Madison city leaders for embracing the local Tibetan community and urged their continued opposition as local political leaders to political oppression around the world. 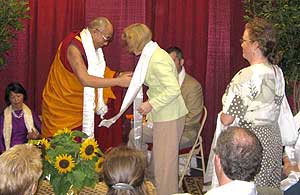 "You people are really showing your concern for those people who have lost freedom, and I appreciate that," said the temporal and spiritual leader of Tibet, who is presenting a series of talks and Buddhist teachings during a six-day visit to Madison.

Mayor Dave Cieslewicz and 17 members of the City Council met with the Dalai Lama in an intimate sitting room at the Alliant Energy Center Coliseum. Each exchanged a silk scarf with the Dalai Lama, a Buddhist symbol of pure intention.

"America is a champion of democracy, liberty and freedom," the Dalai Lama said. He spoke of the restrictions on religion imposed on Tibetans by the Chinese, who occupied the Himalayan land in the 1950s. The Chinese government has turned its attention to modernizing infrastructure, he said, while the spiritual Tibetans seek freedom of religion and autonomy to safeguard their cultural identity.

"We dearly want to modernize Tibet. Provided we are given a full guarantee to preserve our culture, our language, our spirituality ... then we are willing to be part of China," the Dalai Lama told the Madison leaders.

West-side Ald. Thuy Pham-Remmele, a native of Vietnam, told the Dalai Lama that the experience of her people carries a message of hope for Tibetans.

"My country was under the control of China for 1,000 years," she said. "They tried to extinguish us, and we are still here all over the world and we still keep our language."

"I thank you for coming here," Pham-Remmele said. "Long life to you."

A special long-life ceremony for the Dalai Lama, 73, is a unique aspect of his visit this year.

A Nobel Peace Prize recipient who is considered by Tibetan Buddhists to be the 14th reincarnation of the Buddha of compassion, the Dalai Lama has visited the Deer Park Buddhist Center and monastery in nearby Oregon several times in recent years. This visit comes as hopes are raised for a political resolution with China, which is looking to improve its human rights image as it steps upon the world stage with the Olympic Games on Aug. 8.

Yet the Chinese consulate in Chicago protested, as it did in 2007, the flying of the Tibetan flag at the City-County building in honor of the Dalai Lama's visit. Consul General Ping Huang implored local officials to take down the flag and refuse to meet with the Dalai Lama in a letter to Cieslewicz received Monday.

"The purpose of Dalai Lama's visit to the United States this time, as always, is to engage in activities aimed at splitting China and undermining China-U.S. relations under the cover of religion," the Counsul General wrote.

Cieslewicz said he will tell Chinese officials that the Dalai Lama is a visiting dignitary of world stature, and that it is not inappropriate to honor his visit by flying the Tibetan flag.

The Dalai Lama, Cieslewicz said, is playing a high profile, and important role in the world now, but his approach carries much broader implications.

"His methods are all about non-violence and bringing people together and finding common ground without compromising on principle," the mayor said. "I think that's an important message in any walk of life, in any endeavor.

"It can apply to our much smaller problems on a local level -- dealing with a very difficult budget," said Cieslewicz who last week asked city departments to slash funding by 5 percent next year. "The idea that you should be steadfast in principle but willing to see the other persons' point of view is an important message."

Several City Council members said that they realized that meeting with the Dalai Lama might draw criticism from constituents who don't recognize Tibet; one said she wrestled over whether to take advantage of a privilege not offered to the ordinary city resident. But they were glad they came.

"It was a real pleasure and real honor to have met with the Dalai Lama directly," said Satya Rhodes-Conway, who represents the east side's District 12.

Ald. Eli Judge, who represents campus-area District 8, remarked on the diversity of people who had come out Tuesday to hear the Dalai Lama's teachings and the relaxed way they gathered on the Alliant Center grounds between sessions.

"Literally every single walk of life you could think of was represented," he said.

Ald. Paul Skidmore said he felt humbled and awed at the opportunity for such a personal meeting.

"When I was in there, I was kind of speechless and that's unusual for me," said Skidmore, who represents west-side District 9.