Danny Grzenia found peace of heart when he found Buddhism

Omena, Michigan (USA) -- The Omena resident has been a Buddhist since 1998 and says it felt right from the start. "I'm a pacifist by nature and drawn to the gentleness of Buddhism," he said. 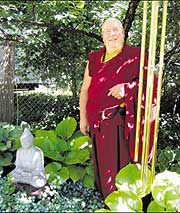 << Karma Kunga stands in the Buddhist prayer garden at his home in Omena.  Gretchen Murray/Record-Eagle

Grzenia wasn't looking for an organized, spiritual path such as Buddhism, but its teachings struck home, and it didn't take Grzenia long to immerse himself in an in-depth study of the religion that eventually led to his ordination as a Buddhist monk.

"Several years ago I read a book called 'Awakening the Buddha Within: Tibetan Wisdom for the Western World' by Lama Surya Das," he said. "He's a western lama of the Tibetan tradition and his books just hit all my spiritual yearnings -- things I had come to the conclusion of and things I was headed toward, and I said yes, finally I have found a place where I am very, very comfortable as a spiritual person."

Grzenia attended one of Lama Das' silent retreats in New York, no newspapers, no radio, no magazines, no TV, no talking for two weeks. "I had practiced silence in various capacities throughout my life, but never for a long stretch. It was wonderful. I very much enjoyed it," he said. "I had been practicing Buddhism prior to going on the retreat for about a year and a half or two years, and during the retreat, I took refuge formally."

Grzenia said taking refuge before a lama or a monk is like Christians' baptism, and that's when he took the formal path of Buddhism. "That's how I entered the path," he said.

He knew ordination was the right path for him, and his teachers gave him permission to pursue it. "It's not an easy thing for a westerner to do," he said. "There isn't a seminary where one goes through certain set courses of this or that then gets ordained. My teachers said it was appropriate and a good path for me to take. The process of ordination is the process of receiving the vows and the blessings of being a monastic, but the path of being a monastic is an everyday changing process."

Today he is known as the Venerable Karma Kunga and is a monk of the Tibetan Kagyu tradition.

Kunga said Buddhism didn't change his everyday life. It enhanced it and reinforced ways of behaving and acting. It gave him strength and encouragement.

He describes Buddha nature as more than the belief that everything in the universe is one. It is the essence of all sentient beings, in that sense, there is a oneness. "We all are Buddhists actually and just don't know it," he said. "We all are enlightened beings but we have so much baggage or karma or obscurities that block us from experiencing the essence of the reality of who we really are, and that is an enlightened being with Buddha nature."

He related that the key concepts of Buddhism are compassion, love, kindness and the transforming of ourselves from negativity through positive thoughts and acts. "It's like a great Tibetan Buddhist teacher said, when it comes down to it all the great teachings are about maintaining a kind, loving heart under all circumstances and in all conditions. Let's face it, that's a difficult thing to live," he said.

His religious practice includes dressing in his Buddhist robes every day.

"When I was ordained my teacher gave me permission that if I ever worked in a job where my robes would be an interference then I could wear lay clothes on the job. That hasn't happened. I know western monastics who wear their robes only at home or in private, although that's a fairly small number," he said. "I know a monk who's a roofer and he couldn't wear his robes on the job, and that would be quite a sight."

Kunga's days are varied. His small Web design business brings in a modest income, and he shares a home with friends. He prays and meditates throughout the day and evening. "It's not a lonely place. I don't have a set schedule. Some monastics do," Kunga said. He has been conducting a weekly Medicine Buddha ceremony that has grown in attendance from one or two to about eight people. "The Medicine Buddha emphasizes healing mental or physical problems. It also expands to the healing of the planet and the universe. Medicine Buddha is an excellent practice for the elimination of war, terrorism and fear in the world," he said.

"If we don't come down to respecting all sentient beings and life and detaching ourselves from our ego it's going to be a more suffering place than what already exists," he said of the world situation.

"I think the world is filled with kindness and lovingness. We just don't recognize it. Most people have a kind and loving heart. When we start looking for the good, the wonderful, we will find it more."