Naperville, MI (USA) -- A school gym was the unlikely setting for a Buddhist ceremony in Naperville this past weekend. 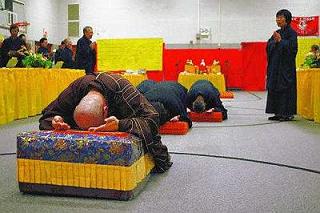 << Venerables, or Buddhist monks, lead a Thrice Yearning ceremony Sunday at the Meadow Glens Elementary School in Naperville.
(Tyler Stoffel/Special to The Sun)

Beating gongs and chimes filled the air as six robe-clad Buddhists filed into the gym at Meadow Glens Elementary School in Naperville. The brown-robed, bald-headed Venerables were Buddhist monks and nuns in Naperville from Australia, Singapore and Canada to perform a ceremony known as the Thrice Yearning ceremony.

The ceremony is rare in the Chicago area; it has only been performed four times since the Amitabha Buddhist Library opened in 2003, and was not performed at all before then, said Bert Tan, co-director of the library.

About 75 people were at the ceremony. Observers lined the walls as 10 people filed to the middle of the room to perform. Tennis shoes peeked out from under the observers' long, black robes as the group chanted an invitation to the dead to join the ceremony.

The first part of the three-part ceremony lasted about two hours.

Everyone chanted from Asian-scripted books as the performers slowly shifted positions, moving from a painting of the Buddha at one end of the gym to the opposite wall, where yellow strips of paper bearing names of the dead plastered the wall above tables of food for the dead.

"This is the heart sutra," whispered Bert Tan as the performers moved toward the food-piled tables. "They are inviting the dead to join the ceremony."

The Thrice Yearning Ceremony is intended to build up merits and give peace to the dead and the participants. Buddhists believe it also spreads peace to the surrounding area and can ward off natural disasters.

Planning a Buddhist ceremony like this one can be complicated and expensive. Bert Tan said the library paid $12,000 for a similar ceremony in May, and although some cost will be covered by donations, he is expecting this one to cost more.

And the money isn't the only difficulty in this kind of ceremony.

"We need many venerables - we need monks and nuns here to host the ceremony," said Li Su Tan, co-director of the Amitabha library. "We need to have a team that can play the instruments and either the monk or a Buddhist nun to host the ceremony. So it's not easy."

But Bert Tan said the weekend had been successful.

"It's perfect," Tan said. "It's very smooth and everybody was very joyful after yesterday and today."

The ceremony was the conclusion of a two-day retreat; on Saturday participants performed chanting exercises. Participants included Illinois residents and Buddhists from as far away as Houston and Atlanta.

Wu Shing, a 38-year-old nun from Australia, was in Naperville to help perform the ceremony. She conducts the ceremony frequently in Australia, and said Sunday's ceremony went well: the participants were focused, and she believes the dead found peace.

"I don't have clairvoyance or anything like that," Shing said. "But by just the atmosphere you will be able to know - the calmness, the energy."