Buddhist temple may come to Pataskala

PATASKALA, Ohio (USA) -- A Buddhist temple, hotel and spa could be coming to Pataskala. 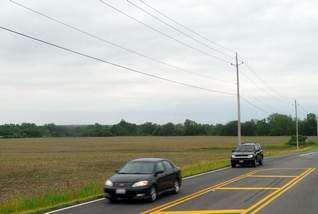 << A Buddhist temple is planning stages to be located on this site off Blacks Road in Pataskala. (Matthew Berry, The Advocate)

Representatives from the Columbus Buddhism Center have talked to city officials about building the Columbus Thai Temple on 5 acres south of Blacks Road, west of Watkins Road and east of Township Road.

A blessing is scheduled for 9 a.m. Friday on the site, which now houses farm fields.

“They’re saying publicly we’re building phase one, and we have no reason not to believe them,” Pataskala Mayor Steve Butcher said.

So far, the Buddhism center has not submitted any formal building plans to the city, but Butcher said the organization does not need to rezone the property, which is zoned for residential uses, to build the temple.

“It appears they have all the zoning they need,” said Butcher, adding that religious organizations can build churches and temples on land zoned for residential uses.

The organization has submitted a rough design concept to the city. The concept indicates the Buddhism center will “be the first Thai temple built in the United States to be developed on a vacant land parcel.”

“The Columbus Buddhism Center expects to become a center for meditation practicing and teaching as wall as a place to conduct religious rites for Buddhists of all nationalities living in the region,” the proposal reads. “It definitely should become a destined attraction for many pilgrims from near and far.”

Aside from the temple, the proposal also touts plans for a restaurant, hotel and wellness spa for pilgrims and general visitors. A large pond featuring a floating market also is featured.

“It’s not just a temple,” said John Tai, president of the Foundation Steering Committee for the Columbus Thai Temple Project. “We’re going to have a shopping center, restaurant, hotel, side-by-side.”

Tai, of Columbus, said the group expects to develop the project by July 4, 2011.
Groundbreaking on the temple could start in six months to a year, Tai said.

Long term, Tai envisions the development employing as many as 500 people.

“I hope this will work for us and for the people of Pataskala,” he said.

Butcher said the developer will need to secure zoning changes to build the restaurant, hotel and additional features beyond the religious temple.

Burkeley Showe, president of National Housing Corp., has agreed to donate 5 acres to the center. Showe Builders Inc. owns 160 acres south of Blacks Road. Much of it remains undeveloped.

Showe is a client of Pataskala Councilman Bernard Brush, an attorney. Brush confirmed Wednesday his client intends to donate the land for the temple.

“I think it could be something beneficial for Pataskala,” Brush said. “It could be a great shot in the arm economically.”

Brush added the proposal remains in the early stages, and he hopes it can come to fruition.

The Buddhism center said on its Web site (www.columbusbuddhismcenter.com) it still needs to establish a nonprofit foundation to coordinate and manage the development of the center. The foundation, which will contain a counterpart in Thailand, will also handle fundraising efforts.

Jobes Henderson & Associates, an engineering firm, has submitted a rough plan to the city containing two options for the property.

The second proposal would again set aside acreage to the east of Pataskala Greens for residential development. However, it would move both the temple and plaza west of the first proposed site to permit the construction of an 8-acre commercial area.

Both proposals include a new road running from Broad Street to Blacks Road.

“The physical placement and investment of this road will need extensive discussions with the city,” Jobes Henderson’s proposal reads.

Butcher, when asked about the various components of the proposal, said it will take a lot of zoning and planning work to make it a reality.

In the meantime, Tai wrote in a June 1 letter to city administrator Tim Boland that the temple project is being developed under the patronage of the Revered Somdet Phraphuthajaran, acting patriarch of Buddhism in Thailand.