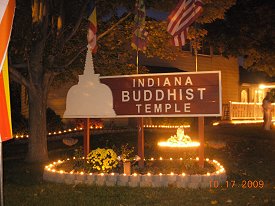 This year the Kathina Ceremony was sponsored by Mr. Anuruddha Rathninda and family. The celebration included Buddha Puja, Sangika Dana, Chanting of the Paritha, a colorful Kathina procession and lighting of over one thousand candles.

The program began at 10:45 a.m. with the administration of the five precepts by Venerable Y. Sankichcha of Great Lakes Buddhist Vihara. The offering of Buddha Puja was conducted by Venerable Talangama Devananda, chief monk of the Indiana Buddhist Temple.

Twenty monks from different temples from Detroit, Chicago, Pittsburg, Los Angeles and Burmese temples in Fort Wayne participated in the Sangika Dana. Venerable S. Pemarathana of Pittsburgh Buddhist Center gave special Dhamma talks on the occasion. Lunch was served for all who attended the ceremony.

Chanting of the Paritha to invoke the blessings to the congregation began at 3:00 p.m. Chanting took place in the beautiful chamber in the newly remodeled hall at the temple. Venerable Devananda, the chief monk led the Maha Piritha and Dhammacakka Sutta while Venerable Babarande Sumedha led the rest of the suttas. Before chanting started Venerable M. Pannaloka explained the significance of the Paritha. At the end of the chanting, blessed water and blessed thread were distributed to the congregation.

At 7 p.m. everyone joined in lighting candles to pray for happiness and success for all living beings. Over one thousand candles were lit on the temple premises creating a very beautiful scene.

At the end of the day, dinner was served for all who attended the ceremony. Everyone went home with lots of blessings and wonderful memories.

The whole program was organized by Venerable Neluwe Seelawimala and Venerable Babarende Sumedha under the guidance of Venerable Talangama Devananda, chief monk of the Indiana Buddhist Temple.