Buddhist temple a part of life for many

Worthington, Ohio (USA) -- Upon entering the Wat Lao Siri Buddharam Temple on a recent morning, Thongsay Chantharath removed her shoes and knelt down at the foot of a small staircase that leads into the building’s primary room of worship. 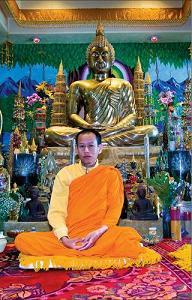 Since Monk Elder Keo Saysombath was in the “Buddha Room,” Chantharath remained where she was. Her action helps Saysombath practice one of 227 precepts that are part of observing his faith.

This is one of the myriad of customs that are probably foreign to most in the area that have never visited or met anyone associated with the Buddhist temple. Yet while there are indeed many differences, there are also similarities to many Christian religions.

Wat Lao Siri Buddharam has had a presence in southwest Minnesota for a number of years, Chantharath explained.

“It was actually in 2003 that we first came out here, and for a while we just got unconditional permit to be out here because of zoning,” said Chantharath of the temple, which is located on a dead end along Oliver Avenue, about a mile from Prairie View Golf Links. “Then, in 2007, the city granted the temple permanent zoning rights to be out here, but we have to build a well. That project is going to start this spring.”

Prior to Worthington, the temple had been located in Mountain Lake.

“Worthington has a bigger population, and it wasn’t very feasible to travel 45 minutes all the time when you wanted to worship,” she said. “There’s a bigger Lao community in Worthington and around the area. ... People from Sioux Falls come here, as well as from Windom, Magnolia and Jackson.”

Chantharath said the temple has a membership of about 600. They all don’t worship at the temple regularly, she added, but usually attend special events in significant numbers.

“When we have celebrations in the summertime, you’ll probably see the 600, but not all at the same time,” she said. “We’ll have a celebration starting in the morning and continuing into the night.”

This year’s Lao New Year (Boun Pee Mai) event will take place April 24 at the Brewster Legion Hall. There will be meal and a blessing of the new year — a ceremony known as Phouk khene — at 5 p.m., followed by entertainment.

During Phouk khene, which is given by one of the monks from the temple, strings are tied to a tree adorned with objects that people feel will give them blessings in the new year. Each person present holds onto a part of a string to receive the blessing. After the blessing, the strings are removed from the tree and cut into pieces that may be tied around a person’s wrist, and the strings are worn for three days for good luck.

The lives of monks

Three monks currently reside at Wat Lao Siri Buddharam, Chantharath said. Saysombath sat above Chantharath on this morning — it is a sign of respect for all visitors to sit below the monks when in the temple.

The monks have designated a time of 11:30 a.m. each day for chanting, which is done for about an hour. Saysombath said the chanting — done in an ancient language of scripture — to offer thanks to all people who provide them with food and other gifts at the temple while praying for their blessing.

A great deal of other time is spent on the upstairs level of the temple, reading scripture. The monks welcome visitors to the temple throughout the day (one of them is always there), and do not leave the building after about 7 p.m. or so.

In addition to frequent meditation, there is a television — “Thai TV, via satellite,” Chantharath said — that offers programming relevant to the monks’ spiritual lives. There is also eating, but there is just one meal a day.

“You cannot have solid foods after 1 p.m., so they really have to discipline themselves,” Chantharath explained. “In Laos, people are always bringing food to the monks every morning. Here, there are a couple of people who bring food every day.”

“It’s Thanksgiving here every day,” added Saysombath, who is continuing to learn English, with a small laugh.

Vegetables and rice (“Every meal has to have rice; sticky rice is more filling,” Chantharath said) are the primary foods in the monks’ diets. Mealtime is typically after chanting — about 12:30 p.m. or so.

Saysombath described some of the other facets of becoming a monk, and what goes along with that chosen way of life.

Males younger than 21 years of age may only be considered at the level (or gua) of novice, as Saysombath said they’re “not mature enough” for a most advanced status. At 21, males can become monk elders — but there’s a lot to know and observe.

“You need to know 227 precepts,” Chantharath said. “If you’re younger you may know all 227 precepts, but they’re too hard to observe. … That’s why there’s only 10 precepts for a novice.”

A few of the precepts may seem simple, or understandable, enough

“You can’t kill animals,” Saysombath said. “The first living animals were humans; you can’t harm them.”

Other precepts include the forbidding of stealing, marriage, lying, and eating of such meats as tiger, elephant, cat, dog, monkey and snake. (Monks may eat beef, but they can’t cook it themselves.) Of course, monks also maintain celibacy, a consideration that almost certainly is a reason for other customs.

“A woman cannot touch the monks or have any physical contact with the monk elders,” Chantharath noted. “And there are no women allowed in the Buddha Room.”

Monk Elders may advance to the level of Master at the ages of 60, 70 or 80, Chantharath added.

In addition to the Buddha Room, a unique aspect of Wat Lao Siri Buddharam Temple is a small bed surrounded by flowers that’s seen to a person’s left upon entering the building. That area, Chantharath said, is called “the money tree.”

“It’s where people come and give blessings,” she explained. “They hang money there to give to people in the afterlife. … It’s money to bless their loved ones after they’ve passed on. Whatever we give during a blessing or something, what we give to eat or give to bless on the ceremony bed, they will get in the afterlife.”

The money tree, the Buddha Room and the remainder of the temple is open for worshipping purposes seven days a week.

Anyone are welcome to come to the temple to observe or participate.