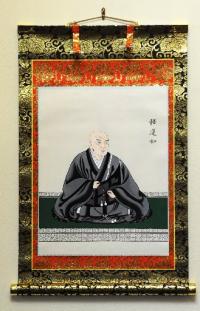 << One of two scrolls donated to the Longmont Buddhist Temple recently. The scrolls, which are handcrafted in Japan, are a signature of Jodo-Shinshu temples. Jane Kanemoto, whose family belongs to the temple, donated the scrolls in her late relatives' memory. ( LEWIS GEYER )

Two hand-painted scrolls, which hang on either side of the shrine, depict two early founders of Jodo Shinshu Buddhism, a non-monastic, household form of Japanese Buddhism the Longmont temple follows.

The scrolls, which are each roughly a foot wide and about 2 feet tall, depict two elderly Japanese monks sitting cross-legged in black robes and holding burgundy Buddhist prayer beads.

"In some ways, they are a reflection of the teachings these two teachers wanted to share because they are simple and complex at the same time. They are simple in the fact that they're paper and fabric.

They're complex in the sense that they represent so much, sort of like the way life works," said the temple's sensei, the Rev. Carol O'Dowd.

The temple dedicated the scrolls on Sunday. They are a signature item displayed in temples that follow Shin Buddhism.

One scroll depicts Shinran, a Japanese Buddhist monk who founded the Jodo Shinshu tradition. Shinran, who lived at the turn of the 13th century, worked to make the teachings of Buddha accessible to everyday people.

"What he did was he took these really complex teachings and made them simple; anybody could understand them. And then he put them in chant form so they were easy to remember," O'Dowd said.

The other scroll shows Rennyo, a descendent of Shinran from the 15th century who is regarded as the "second founder" of the faith, O'Dowd said. In addition to strengthening the organizational structure of the faith, he used printing blocks to write down Shinran's summaries of the sutras, Buddha's teachings.

The images of the men face toward the statue of the Amida Buddha, considered by Shin Buddhists to be the embodiment of enlightenment, at the shrine's center.

"By having pictures like this, it's a reminder that average people also are part of the enlightenment, and it takes all of us to share wisdom and compassion," O'Dowd said.

Longtime Longmont resident Jane Kanemoto donated the scrolls to the temple in honor of her late husband, George, and her brother-in-law, Jimmie, and his wife, Chiyo, who are also deceased. Kanemoto's family helped build the Longmont Buddhist Temple on the northwest corner of Pike Road and U.S. Highway 287.

"I've been wanting to do this for a while, so when (O'Dowd) talks about Shinran, the members would really know what she's talking about," Kanemoto said.