Some of your favorite, inspirational books might have Boulder ties.
Advertisement

Boulder, CO (USA) -- The city is home to what's said to be the largest publisher of English-language Buddhist books in the world  -  although this publishing house is far from limited to only Buddhist topics. The focus: books that are inspirational and contribute toward a better world. 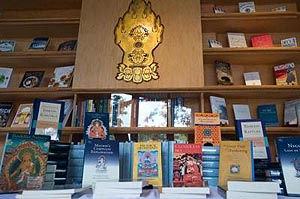 << A display of books at Shambhala Publications in Boulder. (Autumn Parry / Daily Camera)

Shambhala Publications just celebrated its one-year anniversary since it relocated to Boulder from Boston.

Of Shambhala Publications' 1,600-plus titles, slightly more than half are Buddhist-centric.

"When we're considering a book, we always think, 'Is this something that's going to benefit people on some level, whether spiritually, emotionally, psychologically or physically? Is this going to be helpful to people?'" says Nikko Odiseos, president of the publishing company. (Although it shares a name, the publishing company is not affiliated with Boulder's Shambhala Buddhist organization.)

Many of Shambhala's books are inspired by "Eastern wisdom," but it also features titles on contemplative Christianity and Judaism  -  less dogmatic stuff and more about "the heart of things," Odiseos says.

"We want wisdom traditions, authentic things with real roots that have proven methods," he says. "Buddhism is a big part, but we have other philosophy and religion topics."

Also under the Shambhala Publications umbrella is Roost Books, a lifestyle niche (that's cooking, crafts, family, gardening), with titles that have won the esteemed James Beard Award for the last two years.

"That's unheard of for any publisher, much less a new one starting out with these kinds of books," Odiseos says.

Freeman and his Boulder wife, Mary Taylor, are gearing up to release a new book late December: "The Art of Vinyasa: Awakening Body and Mind through the Practice of Ashtanga Yoga."

The book touches on philosophy, but it also includes details about specific postures, Taylor says.

She has been doing yoga, specifically Ashtanga Vinyasa, for nearly as long as her husband, who has surpassed the 40-year mark, Taylor says. A regular practice typically takes 90 minutes to two hours, six days a week.

"It's a rigorous practice," she says, adding that she hopes the book educates and inspires other yoga practitioners.

This is her first book with Shambhala, although she has books through other publishing houses. She says Shambhala is unique in how much the staff seems to care about the authors and the topics.

"They have such an ability to really truly tap into and take interest in the authors in a way I haven't experienced elsewhere, and it's amazing," Taylor says. "They're very selective and when they do that, they do it not only as one person, but as a company. Our experience is the whole company feels unified."

Even best-selling author Pema Chodron, who wrote the well-known book "When Things Fall Apart: Heart Advice for Difficult Times," sometimes lives in Boulder (as well as Crestone and Nova Scotia), according to Shambhala Publications.

Next year, a book by University of Colorado Professor Holly Gayley will go to print.

Move to Boulder 'such a good decision'

Shambhala, which is distributed by book giant Penguin Random House, publishes about 100 books a year. Because it's family-owned with deeply embedded values, it doesn't always pick the book pitches that look like easy bestsellers, says Odiseos.

"A book might not be a huge seller, but we know it's an important work, maybe for a small group of people, but people will value it a lot," he says. "We try to be really authentic to who we are."

He says many large publishing companies have tried to buy Shambhala, and over the years, it has encountered multiple opportunities to merge and grow  -  but chose not to. The staff is currently 36 people.

And even though the company recently relocated to Boulder, it's far from a novice to the city  -  it was based in Boulder once before.

Shambhala Publications started in the 1960s in Berkeley, Calif., as an inspirational and educational bookstore. The desire: to have an "enlightened approach" to life. That intention remains, and so does that original bookstore, the company says. The founder's children now work for the company.

"It was an iconic place to find all these books, these very genuine books on spiritual traditions, anything contemplative, not just Buddhist," says Odiseos.

In the mid-1970s, as Shambhala Publications grew, it moved to Boulder for about eight years before setting up shop in Boston.

When Odiseos joined staff in 2010, he says they decided they wanted to get more involved with the community and base from a place that better embodied the messages in the books.

"We wanted to take our words off the page and be a more dynamic company," he says. "After searching a lot of different places, we settled on Boulder, and it was such a good decision."

The company began partnering with Naropa, CU, the University of Denver Publishing Institute and others.

Find Shambhala books at any major book retailer, as well as local bookstores, such as Boulder Book Store, Innisfree and Trident. Shambhala Publications has its own bookstore, as well, which features its more than 1,600 books in print.

2. "Writing Down the Bones," by Natalie Goldberg

4. "The Happiness Trap: How to Stop Struggling and Start Living," by Russ Harris

6. "How to Be an Adult in Relationships: The Five Keys to Mindful Loving," by David Richo

7. "The Art of Peace," by Morihei Ueshiba (as featured on "The Walking Dead")

8. "The Art of War," by Sun Tzu, translated by Thomas Cleary

1. "The Heart of Meditation," by His Holiness the Dalai Lama

2. "Sitting Still Like a Frog: Mindfulness Exercises for Kids (and Their Parents)," by Eline Snel

4. "Yoga of the Subtle Body: A Guide to the Physical and Energetic Anatomy of Yoga," by Tias Little

6. "Our Pristine Mind: A Practical Guide to Unconditional Happiness," by Orgyen Chowang

7. "Mindfulness on the Go: Simple Meditation Practices You Can Do Anywhere," by Jan Chozen Bays

1. "At Home in the Whole Food Kitchen: Celebrating the Art of Eating Well" (2015 James Beard Award), by Amy Chaplin

3. "My French Family Table: Recipes for a Life Filled with Food, Love, and Joie de Vivre," by Beatrice Peltre

4. "Tinkerlab: A Hands-On Guide for Little Inventors," by Rachelle Doorley

5. "Raising Wild: Dispatches from a Home in the Wilderness," by Michael Branch

6. "The Artful Parent: Simple Ways to Fill Your Family's Life with Art and Creativity," by Jean Van't Hull

7. "Love the House You Are In: 40 Ways to Improve Your Home and Change Your Life," by Paige Rien

8. "The Embroidered Garden: Stitching through the Seasons of a Flower Garden," by Kazuko Aoki
TOP