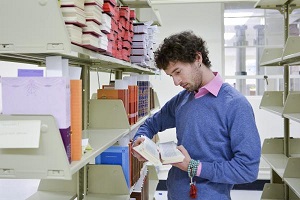 << Eben Yonnetti, a master’s student in religious studies, focuses on the contemporary transmission and translation of Tibetan Buddhism. His primary research interests include the contemporary trans-national and trans-linguistic dissemination of Tibetan Buddhism, as well as translation and ritual studies more broadly. CU Boulder photo by Patrick Campbell.

As an undergraduate at Siena College, Eben Yonnetti, on a whim, went on a study abroad trip to Nepal to study in the Tibetan and Himalayan Peoples program. Yonnetti lived with a Tibetan exile family who helped him assimilate among the people and learn about their religious community.

Yonnetti eventually became so engaged with Tibetans and Tibetan culture that he decided to study Tibetan language and religious practices and ideas. He is working on a graduate degree in religious studies with a specialization in Tibetan Buddhism—specifically, how Tibetan Buddhism has spread to different parts of the world in the past 50 years.

“I was a lost student floating around in a sea of ideas,” Yonnetti said. “A typical rebel without a cause. That experience started me off, and now here I am.”

His field research project was titled Like the Roar of a Thousand Thunders: Instrumental Music and Creativity in Tibetan Buddhist Ritual. It examined the role of ritual music in Buddhist performance and the ongoing variations and changes to ritual practice through different instrumentations and compositions.

One experience became a defining moment for Yonnetti during his trip, when he had an opportunity to observe a ritual performed by monastics at a stupa, or Buddhist shrine. It was a dream come true for Yonnetti, who was mesmerized by red-robed monks chanting and playing horns, cymbals and drums.

One monk, however, sat apart, not participating as the others were. Yonnetti noticed him looking at his phone and gazing out the window. Suddenly, in the middle of the ritual, one of the monks grabbed a handful of rice and chucked it across the room to get the distracted monk’s attention.

“What I thought I knew about Buddhism was totally different when I was thrust into a community of Buddhists,” Yonnetti said. “There’s a hyper-focus on philosophy and meditation that’s emphasized in the U.S. When I thought about Buddhists, I thought they were always mystical, alluring, enlightened with lofty ideals, but in that moment, I realized they are just like us, people living their everyday lives. That was a very grounding experience for me.”

After his study abroad trip ended, Yonnetti spent four months studying Buddhist philosophy at the International Buddhist Academy in Nepal and teaching English to monks at a nearby monastery.

“After that experience, I started to pursue my own study and practice,” he said.

This semester, Yonnetti received a Provost Fellowship for University Libraries to work on the 600 or so volumes of Tibetan-language materials that have been donated to Norlin Library by the Tsadra Foundation. He’s generating bibliographic entries for many works that are not yet cataloged. There isn’t an entry for these works in English anywhere else in the world, Yonnetti said. This treasury of Tibetan texts consists of religious, historical and philosophical materials.

The gifted texts include the collected works of a number of the great masters of Tibetan Buddhism, whose works are only beginning to be examined in any depth as Tibetan studies expands as a field. The work Yonnetti is conducting on the collection will significantly enhance the repository of information from which scholars worldwide can draw.

Yonnetti is working with Holly Gayley, assistant professor in the Department of Religious Studies, compiling an online guide to Tibetan resources at Norlin. One challenge to this project is that there isn’t an extensive history of studying Tibet by Europeans and North Americans, Yonnetti said. Many of the scholars translating Tibetan texts into English are first- or second-generation translators, and many of the translations vary immensely.

“For example, a word that translates to ‘wisdom’ can also mean ‘knowledge’ or ‘the pristine knowledge of the primordial,’” Yonnetti said. “I am interested in why scholars translate in a way that is not consistent.”

Yonnetti has also organized an exhibit on ritual implements, such as the ubiquitous temple bells and their use in Tibetan Buddhist ritual practice. The exhibit went on display in Norlin starting April 12.

“Tibetan study is such a new field,” he said. “The first people working in it in the U.S. academic world have only been doing so since the mid-1970s. One of my advisors told me a story about meeting a well-established scholar in a Tibetan studies library. She asked the scholar what she should study. He told her to crumple a piece of paper and throw it. Whatever it touches in the library likely had not yet been translated and probably nobody has written about it. There’s just so much to do in this field.”
TOP