Durango, CO (USA) -- How do you construct a modern community building that keeps the traditions of one of the world's oldest religions? And how can that building's design reflect the beauty of its site and remains ecologically sensitive to the land? 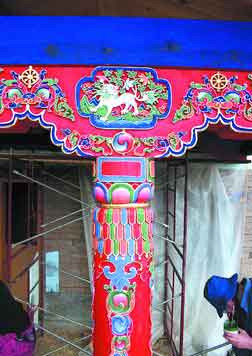 That was the challenge faced by the community at the Tara Mandala Buddhist Retreat near Pagosa Springs. For the past 10 years, summer retreats at the 600-acre site have been held outdoors - in yurts, tepees and large white tents under what might be termed rustic conditions.

In October, the new community building was completed after a $1 million capital campaign. The next phase includes Tara Temple, with a large teaching space, library and meditation hall, as well as three residence buildings.

"While all this development at Tara Mandala promises more comfort and access to modern conveniences," Tara Mandala spokeswoman Beth Lee-Herbert said, "retreatants will continue to find themselves entranced by the wild and untouched surroundings that offer a deepening of practice and retreat."

The Tibetans, exiles from their country, are working on other Buddhist buildings.

Now, rather than showers run on solar power open to the sky, permanent bath and toilet facilities are available. Cooks and their helpers can enjoy the new commercial kitchen instead of preparing meals under the large box elder affectionately called the "Mother Tree."

And although the yurts and tents will still be used for housing, the outdoor decks of the community buildings will allow retreat participants to continue enjoying the beauty of the Tara Mandala site.

Summer retreats will continue under the large white teaching tent on Kapala Meadow until Tara Temple is constructed.

That means "hummingbirds will make their rounds at practice," Lee-Herbert said, "whirring the air with their glimmering violet and green wings."