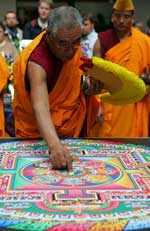 << A Tibetan Buddhist monk takes a few grains of sand from the center of the sand art mandala and places it on top of his head after making a cut through the artwork during the closing ceremony Friday afternoon in the K-State Student Union. Steven Doll/Collegian

The deity "White Tara" represents longevity, many of the monks said. The art was assembled in the Union to celebrate the Union's 50th anniversary.

The monks performed an opening ceremony Wednesday and then began working on the art.

"The first step in making the art is to lay down lines and etch them in," Jean Paul, tour road manager, said.

The monks did this with chalked strings. Two held each side of a string across the table, pulled the sting up, and snapped it down to leave a straight chalk line. Eventually these lines became an intricate grid on which they began dropping sand.

The closing ceremonies began with Tibetan music and a sung prayer.

Tibetan music incorporates throat singing, which requires the monks to use sub-vocal chords deep in the throat. The sound produced is a deep growling sound.

"It was a trip," Loaiza said. "The throat singing really came from the soul."

After singing the prayer, one monk stepped forward and stood before the mandala. He rhythmically rang a small hand bell and then cut a line directly through the center of the mandala. He circled it twice and made four total cuts while ringing the bell.

He returned to the group of monks, and another monk stepped forward with a paint brush. This monk swept the smooth sand into a pile.

"It just hurt my heart when they dismantled the mandala," onlooker Kahlen Ryloa said.

Ryloa said she was in the Union participating in a metallurgy and jewelry workshop and broke early for lunch to watch the ceremony.

"The monks were so calm and I was thinking, 'Don't do it.' I could actually feel the energy of the room change," Ryloa said.

According to the informational pamphlet distributed by the monks, the mandala is dismantled upon completion to symbolize the impermanence of all that exists. Normally, monks sweep the colored sands and pour them into a nearby river so the waters can carry the sand's healing energies throughout the world.

In the Union, monks gathered the majority of the sand one teaspoon at a time and placed it into small plastic bags to distribute to the crowd of onlookers.

"I'm happy to have some Tibetan sand in my hand," Loaiza said.

Ryloa said she plans to help the monks spread the sand's healing energies throughout the world.

"I'm going to send my sand to a friend in Pennsylvania," Ryloa said.

The monks are in the United States with an organization known as the Drepung Loseling Monastery.

"We have three main purposes for our journey here," Tendhar said. "We want to share ancient Tibetan art worldwide, get more awareness toward the situation in Tibet and gather support for all Tibetan refugees."

China invaded Tibet in 1959 and, since then, ancient monasteries have been destroyed, Buddhist practitioners have died, and the leader of their faith, the Dalai Lama, has become a refugee, Tendhar said.

"The United States has been helpful to our situation," he said. "Some of the Tibetan military was trained in Colorado."

Tendhar said the monks' journey will take a little more than a year.

"We've already been to Georgia, Utah, Florida, New Mexico, Texas, New York and Massachusetts, among other places," Tendhar said. "It's been a lot of fun. We do group meditations while we are driving and play a lot of basketball."