Dalai Lama to bless largest monument in the US

A visually stunning and historic event beckons Colorado on September 17, 2006

Boulder, Colorado (USA) -- In an event of historic and religious significance, His Holiness the Dalai Lama will bless the largest Buddhist monument in the United States on Sunday morning, September 17 at the Shambhala Mountain Center in the Rocky Mountains of Colorado. 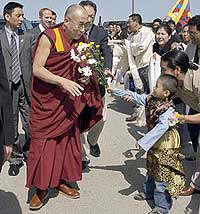 Arriving in a convoy of helicopters from Denver, the Dalai Lama will be greeted by over 2,000 Buddhist practitioners.  He will then proceed to The Great Stupa of Dharmakaya, one of the most noteworthy examples of Buddhist sacred architecture in the world and the largest monument dedicated to peace in North America.

In a two-hour event, from 10:00 am – Noon, the Dalai Lama will perform a traditional Tibetan blessing of the Stupa, speak to the assembly on the importance of compassion in today’s world, and receive the first Living Peace Award.  The event is hosted by Sakyong Mipham Rinpoche, head of the Shambhala Buddhist lineage, and author of national best-sellers Turning the Mind into an Ally and Ruling Your World.

In addition, Queen Noor of Jordan; Rabbi Irwin Kula of the National Jewish Center for Leadership and Learning; and Walter Issacson, President and CEO of the Aspen Institute, will participate in a panel discussion with the Dalai Lama and Sakyong Mipham Rinpoche on the role of compassion in global leadership.

The event will be visually stunning as the Dalai Lama performs the ceremony high in the Colorado Rockies before an extraordinarily gilded architectural marvel surrounded by hundreds of Tibetan banners and flags.  This exceptional event is of great historic importance as it signifies a new chapter in the flowering of the traditional teachings of the Buddha in the U.S.

The Dalai Lama’s visit is the culmination of a week of events at Shambhala Mountain Center, including two sold-out programs hosted by Sakyong Mipham Rinpoche: Compassion in the Rockies, September 13 - 16, and Compassionate Leadership, a seminar for corporate and non-profit leaders, September 15 - 17.

Shambhala Mountain Center is located in the Red Feather Lakes area of Colorado, a two-hour drive from Denver. This is the first visit of the Dalai Lama to the center, widely regarded as one of the preeminent spiritual retreat centers in the West.  Founded in 1971, it is celebrating its 35th anniversary this year.

After the morning program, the Dalai Lama will return to Denver by helicopter to speak before nearly 15,000 people that afternoon at an event at the Pepsi Center, sponsored by the Mind and Life Institute. Tickets for this public talk are available at www.dalailamadenver.org.