Boulder, CO (USA) -- A midafternoon lull has momentarily calmed the dining room at Hell's Backbone Grill when a woman, windblown and dusty from toiling outdoors, wanders in. 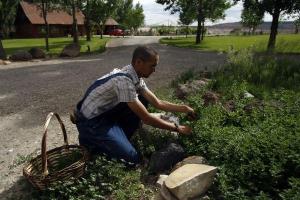 She has just a dozen eggs to sell, yet restaurant co-owner Jennifer Castle abandons her work writing instructions for the night's menu to greet her as she would a close friend, cradling the carton in one hand as she counts out the eggs' worth from the till.

Castle and business partner Blake Spalding have brokered hundreds of similar deals in the 10 years since they took what loved ones called a "crazy risk" by birthing a high-end restaurant in this isolated town of fewer than 200 residents.

With each seemingly insignificant purchase, each trade of tractor time for meal credit, the women have formed what some consider an unlikely alliance with mostly Mormon neighbors long on pioneer values and short on patience with outsiders. At the time of the pair's arrival, townspeople who work the harsh yet spectacular terrain of south-central Utah's Grand Staircase Escalante National Monument still were smarting over what they saw as President Bill Clinton's invasive and naive designation of the monument.

Castle and Spalding are Buddhist. Prayer flags frame the restaurant's outdoor patio, while garden vegetables sprout around a statue of Buddha. The pair also are evangelists for a particular way of eating: The food at Hell's Backbone Grill is organic, seasonal and devoid of anything not produced locally.

Liberal, unconventional, non-Mormon -- yet in conservative, rural Utah they've managed to build community on what they see as obvious parallels between their beliefs and those of their neighbors.

They love and draw spiritual inspiration from their breath-taking surroundings. They respect and appreciate what they're able to cultivate from the land.

"I don't see us as being that different," says Bill Muse, a farmer currently taking his turn as Boulder's mayor. "But then I might not be the best person to ask. I'm biased. They're good friends."

The thing is, everyone else in town says the same thing.

Castle and Spalding came to Boulder from Flagstaff, Ariz., where both catered for river runners. Opportunity drew them: Boulder Mountain Lodge was searching for someone to take over the eatery at the quiet retreat.

The women see themselves as bridge builders, so it's not surprising they named their restaurant after a bridge over nearby Box Death Hollow. Built in 1933 and considered an engineering feat at the time, Hell's Backbone Bridge opened Boulder -- the last town in
Click picture to play multimedia
the U.S. where mail was delivered on horseback -- to automobile travel.

The early years were rough. Spalding says it was hard to get much of anything to supply a restaurant in Boulder, let alone organic produce and meat. They hired everyone in town willing to work for them and, when friends came to visit, gave them jobs as well. "Some days we questioned our sanity," Spalding says.

But here's what saved them: Their food was good.

Castle and Spalding believe many Americans have lost their way when it comes to diet, eating food so heavily processed its source is undecipherable, as well as and industrially farmed produce transported from thousands of miles away.

For them, food is inextricably tied to place, and for habitants of the Southwest broadly defined, that means cuisine that bursts with the intense flavors and colors of chiles and other peppers; corn; squash; root vegetables; grains and seeds; greens; peaches, apples and wild berries; as well as trout and what they call "compassionately consumed" poultry, lamb, pork and beef.

They transform these ingredients into dishes such as chile-crusted filet mignon with poblano crema and cowboy skillet trout marinated in molasses sauce. Edible pansies and sprigs of yarrow, thyme or mint plucked from beds that hug the restaurant offer their own fragrances to each dish.

When people eat at Hell's Backbone Grill, the pair want them to further experience where they've been.

Visitors to Utah's red rock wilderness find themselves altered by their surroundings, deeply moved by the stark force of nature. It's spiritual. It's visceral. It can be life-changing, Spalding says. "We create food we believe deeply reflects the experience people have of this place."

The challenge for Castle and Spalding is no longer to keep a remote restaurant viable, but to stay true to their goals while continuing to meet the high expectations so many have of them. "It used to be that if we fouled up, few people would know, and that's no longer true," Castle says. "We feel a great responsibility to meet people's expectations. It's very humbling."

Spalding likes to say Hell's Backbone Grill is "growing out, not up."

Its success enabled the restaurant to buy a six-acre farm that Spalding's brother Nathanael and volunteers with the Willing Workers on Organic Farms (WWOOF) program are turning into one of Utah's most impressive collection of heirloom vegetables and fruits.

Nathanael Spalding worked in construction near Flagstaff but felt drawn to Boulder by his sister and a desire to give his children a simpler life. "I wanted to raise free-range kids," he jokes.

As he gives a tour of the carefully cultivated farm, its green house and hoop houses, his enthusiasm for each Jerusalem artichoke, each Austrian crescent potato, is undeniable. "I've actually seen Nathanael taste the dirt to prove how fertile it is," says Muse, the Boulder mayor.

The soil benefits from nutrients collected through active composting at the restaurant. And not only is the food raised using this and other organic methods, Nathanael honors Buddhist principles by operating a "no harm farm," meaning he may have to collect a bucketful of grasshoppers and cart them away rather than harm them.

Bees pollinate the plants and return to hives that produce the fragrant honey the restaurant serves. Nearby at her own house, Blake Spalding raises laying hens she estimates produce about five dozen eggs a day.

Not a hen among the flock looks anything like the plump, snowy-feathered chickens to which Americans have grown accustomed. Spalding is helping to repopulate old breeds that more resemble wild turkeys and lay eggs in pastel hues of soft peach, green and lavender.

The close connection Castle and Spalding nurture between the land and their food has drawn people like Tim Towers, who came to Boulder as a volunteer with WWOOF and is now assistant farm manager.

He's a beneficiary of another new initiative by Hell's Backbone. With a grant from Salt Lake City-based Lotus Community Development, Castle and Spalding are responsible for Boulder's first affordable housing project. They bought and renovated an eight-bedroom house where people who work for them may live and pay reduced rents. "Everyone who lives here is on the same page, for the most part, so it works out well," Towers said.

Spalding and Castle continue to dream of the future. Spalding buys all her clothes at Salt Lake City's Deseret Industries because she can't bear to part with $30 for a blouse when she could invest in another fruit tree. She envisions a peach orchard on land that now lays fallow at the farm, and is exploring ways to use solar and wind power.

Despite their aspirations, though, Castle says she and Spalding remind themselves daily why they came to Boulder. " We try to treat our work like every night is a new night, a new opportunity to express our creativity and love through food," she says.

They know they've left their mark on Boulder in the 10 years since Hell's Backbone Grill began, just as Boulder as its residents have inexorably changed them.

"What we do is hard work, but it's meaningful work," Spalding says. "We think we're doing our part from our little corner of the Earth."