Arlee, MT (USA) -- Visualize a 10-acre garden with a thousand Buddhas to inspire visitors of all faiths to reflect on peace and find compassion and happiness within themselves. 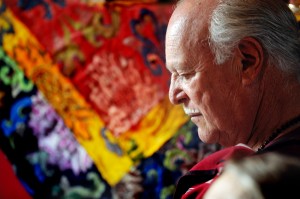 Buddhist teacher Gochen Tulku Sang-ngag Rinpoche of Tibet had such a vision many years ago.

It has become “The Garden of 1,000 Buddhas” under construction at the Buddhist Dharma Center (Ewam Montana) he founded near Arlee.

Recently, the center announced that the Dalai Lama has agreed to personally consecrate the garden. Dr. Georgia Milan, coordinator for the visit, has scheduled the momentous event for late 2011, pending completion of the project.

“His Holiness is getting older — he’s 75 this year — [so] we wanted to make sure we took advantage of his incredible, kind and generous offer to come and consecrate our garden,” she said. “We’re going to work very hard.”

Before the visit, members of the Buddhist Dharma Center need to raise about $1 million to finish the holy site expected to attract pilgrims from around the world.

When complete, the 10-acre landscape shaped like a dharma wheel will feature a thousand Buddhas lining the spokes and a thousand stupas (reliquaries) standing on the circle of the wheel. The dharma wheel symbolizes the awakening or unfolding of teachings of the fourth Buddha Shakyamuni and its spokes depict the eight paths to enlightenment.

Milan, a student of Rinpoche for many years, said it has been foretold that a thousand Buddhas would be born to teach people loving compassion.

“In the middle of the garden is a very large statue of Yum Chenmo who is the mother of all Buddhas,” Milan said. “She represents the emptiness from which all compassion arises.”

Milan stressed that Buddhists don’t worship the statues as idols but use them as inspiration to remember that “we too are Buddhas.”

“We realize that different religions have different names for it but it’s that pure part of ourselves that reflects our true compassionate nature,” she said. “If we could remember that, this would be a much better world. We would have much less violence and aggression.”

Luke Hanley, a resident of the dharma center and a Buddha maker, said work began on the garden in 2000. He said the wheel and spokes are visible at the site.

“It was tricky setting it up with the diameter exactly 500 feet across and the spokes in place in the circle,” Hanley said. “The central figure is nearly complete. A lama comes from Nepal every summer to work on it.”

So far, volunteers have made 430 Buddhas at a barn at the site near Arlee and another site in Missoula. Hanley said all sorts of people have taken classes that produce the Buddhas out of white Portland cement poured in molds.

“You just have to have an inclination to make statues and work with concrete,” he said.

According to Hanley, the huge volume of Buddhas produced by Montanans played a role in attracting the Dalai Lama to visit.

An invitation was issued several years ago but nothing happened until one of his representatives visited the center and saw the many Buddha statues that volunteers had labored to produce.

“He was so taken aback that Westerners had made them,” Hanley said.

After that, the Dalai Lama spotted Rinpoche on a visit to Washington, D.C.. He sought him out and asked Rinpoche when he could visit the garden.

“He said ‘When it’s finished,’” Hanley said with a laugh.

According to Milan, Rinpoche could have located the garden in a large metropolitan area such as New York or San Francisco where it would have been funded and finished by now.

Instead, he picked 10 of the 60 acres of the dharma center near Arlee. The land had been donated anonymously by one of his students.

“He thought that it had to be on this sacred land — this land is very, very special,” Milan said. “He felt that people from all over the world need to come here because of the particular qualities of this land.”

Located on the Flathead Indian Reservation, the garden site is reached by turning off U.S. 93 two miles north of Arlee on White Coyote Road, then traveling about a mile. Speaking through an interpreter at the center, Rinpoche said the area immediately appealed to him.

“The area looks really similar to Tibet,” he said.

Rinpoche, revered as a holy man from an early age, was imprisoned at age 16 and suffered nine years of religious persecution at the hands of the Chinese Communists. After he was released, Rinpoche finished some projects, then left Tibet for Bhutan, India and then a monastery in Nepal.

In the early 1990s, Rinpoche began teaching in the United States. He established the center near Arlee in 1999.

According to Rinpoche, he immediately recognized the area as the location of his Buddha garden vision. He describes the sky as round like the dharma wheel while the ground below resembles a lotus flower with Yum Chenmo in the center.

On his Web site, Rinpoche said he was inspired to build the garden to counteract this era of war, disease and hunger. Milan added that Buddhists see this as a time of anger, ignorance and hatred.

She said they believe the thousand-Buddha garden has the power to inspire people to turn from negativity to treating each other with kindness, love and compassion. Milan said they are building the garden to remind people that happiness is not external — it happens inside ourselves.

“Rinpoche has dedicated it as an international peace center for people of all faiths and religions,” Milan said. “People from all parts of the world will gather here in the name of peace, remembering who they really are.”

She said their community is small so they are asking others for donations. Milan hopes to raise a half million in the next two to three months to complete three phases by fall.

“Also people can donate their time, they can volunteer their prayers, their good wishes,” Milan said. “We have great confidence we will complete this garden.”