Colorado, USA -- For several decades visitors have been coming to the Shambhala Mountain Center in northern Colorado for a meditative experience like no other. 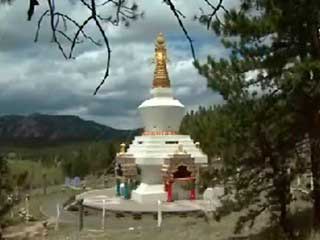 Buddhist meditation, yoga and other contemplative disciplines have been taught at the center since 1971. And in the 1980s construction was started on what is now the crown jewel of the center -- the Buddhist shrine Great Stupa Of Dharmakaya. Joshua Mulder, who became involved in the construction, said the colorful structure is a "monument to human kindness."

From the start the pathway leading to the stupa, Mulder says, was intentionally designed to prepare visitors for a process of inward reflection.

"It's in this cloistered valley. There's a sense when you come of dropping your worldly concerns," he said.

Claude Oeschel was making a pilgrimage to the center when CBS4 was there and said he was impressed by the experience of walking down the trail to the stupa.

"At first, you don't see anything, and suddenly you see a little gold on top of the trees," he said.

Oeschel and fellow Buddhist Ushi Siemens have visited stupas all over the world and found this one "outstanding."

"I never saw something even comparable to this," Siemens said. "It's completely quiet. It's surrounded by national forest. So you have the peace that you would want for this place," Siemens said.

Mulder said the main practice of going to a stupa is to walk around it, or "circumambulate."

The Shambhala Mountain Center is located about 36 miles northwest of Fort Collins and draws visitors from across the globe. Just a few years ago, the Dalai Lama received the Living Peace Award there.

"When the Dalai Lama was here, he said the true stupa is in your heart, so in that sense, this is a reflection of one's own heart," Mulder said.

Inside the stupa visitors take their shoes off under the gaze of a Buddha statue and prepare to meditate and "connect with those deep yearnings within each of us."

The Buddha was created in a style that first emerged about 1,800 years ago in Afghanistan. It was first done by Greek sculptors who were influenced by Indian tradition.

"This is the first time we re-energized this tradition, this sort of Western-featured Buddha, and it happened at the same time as the Taliban were destroying these live stone carvings of the Buddha and using them as artillery practice for their cannons. So as they were being destroyed there, we were recreating this style here," Mulder said.

When CBS4 was at the center Lynette Vialet was one of several people attending a writers' workshop and relaxing.

"It's totally different. I was raised Catholic and so that's very traditional, lots of ceremony and this is just totally still and quiet," she said.

The people of the Shambhala Mountain Center intend for their stupa and all it represents to last a long, long time. Mulder says it took only a few years to develop the concrete that will last a thousand years, a mere drop in the ocean compared to Buddhism's timeless principles.

To get there take Interstate 25 to to Fort Collins. Follow U.S. Hwy 287 about 20 miles to "The Forks." Take County Road 74 E west toward Red Feather Lakes and look for signs pointing south to the Shambhala Mountain Center.