Prescott-area Buddhists meditate on life, the universe and everything 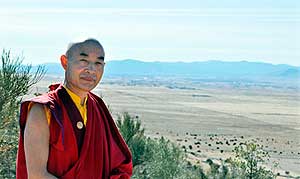 For 70 minutes Tuesday, 10 people sat with their eyes closed in a house on Garden Street, in Prescott.

It was completely silent, except for that chair cracking, that person clearing his throat, a dog barking, at least five times but definitely not more than seven a car door slamming (or maybe that was someone blasting John Cage), a toilet flushing and a phone ringing.

And that clock. That clock that ticked, but didn't tock, with that tick-y tick, like 100 Scrabble tiles falling into a perfect stack in rapid succession, and that, if you really, really listened, sounded almost like - a woman inviting you to open your eyes and stretch.

As the room sharpened, people shifted in chairs and on the floor, unfolding pretzel legs and makeshift mudras.

"It's about mindfulness and being aware, something that hopefully transfers into the rest of your life," explained Carol Cook later.

Carol and her husband, Monty, have hosted weekly Prescott Vipassan Sangha meditations at their home and place of business since the mid-1990s.

It's one of the community's fleeting faces of Buddhism.

The varieties of religious experience

A 1976 law prevents the Census Bureau from keeping tabs on religious beliefs in mandatory questionnaire form, but their annual reports often cite estimates from other sources, including the American Religious Identification Survey.

Buddhists comprised an estimated 0.5 percent of Americans in 2008, on par with 2001 figures and up from 0.2 percent in 1990, according to the most recent survey.

"The popularity of Buddhism and its attraction for white converts that was evident in the 1990s seems to have receded," the report notes in its only treatment of the group in light of dramatic trends.

There's debate as to the distinction between Buddhists and people who practice Buddhist meditation, but for a small group of Tibetan Buddhists east of Chino Valley, it's semantics.

Then again, they've got plenty of time to think about some antics.

Head for the hills

To the Venerable Lama Bunima, the hills surrounding the Garchen Buddhist Institute look like home.

"It's private, a really good spot, and has exactly the same junipers as home for smoke," Bunima said, alluding to the ritual burning of dried juniper leaves.

He grew up in Gargon, a Tibetan village, and began following His Eminence Garchen Rinpoche about the time he turned 18.

"I think this is a very powerful place for meditation practice," Bunima said Wednesday, giving an impromptu tour of the center.

Garchen first visited Tucson around 1996, and received a letter from local patrons who wanted him to start a temple in the area. So he did. They were going to set up shop in Mayer, but year-round access was an issue, so they started building east of Chino Valley around 1999.

Today the center houses four resident lamas, said Trisha Lamb, president of the nonprofit. There are five staff members and multiple group retreats, including 100-day and three-year retreats for followers of Vajrayana Buddhism.

"They say it takes 12 years of solitary retreat to get basic taming of the mind," said Lamb, who moved from California to work at the center. "If you've done a little bit of retreat, you'll see why it takes that long."

During such endeavors, people live regimented lives in which they cook their own food and meditate for two hours at a time, four times a day.

Retreats, Buddhist or otherwise, are usually in total silence, which Lamb said is often difficult for Westerners.

"Sometimes, after a week, they come out and say, 'I really thought it was going to be this relaxing thing, but my mind is just crazy," she said laughing. "And we tell them they're actually seeing their mind as it is without distractions for the first time in their lives."

Whether during monthly events or infamous no-sky retreats, most of the people who visit the center aren't from Arizona. There's a Garchen group in Prescott, too, but their numbers are still fairly low.

Still, Bunima said, Buddhist practices are relevant for just about everyone.

"Buddhism, higher Buddhism is difficult, I think," he said. "But there's not much learning for the lower levels. It's more basic; it's compassion and kindness, and it's easy for everyone to learn."

After each Tuesday meditation in Prescott, Carol reads a selection to the Vissapana group, and they talk about things like personal relationships, service projects and something another woman called "post-Paleolithic stress."

Vipassana, a form of introspective, observation-based meditation, is practiced by people from multiple walks of life, Carol said.

"I don't think of it as a religion so much as a psychology of living," Monty countered.

"But you've got to be careful, because some people consider it a religion," Carol said.

"When I sit down, I let thoughts and feelings come through," said Carol, who, by day, is a counselor in another part of the house. "I don't try to do anything special; I just try to be present and let go."

The meditative technique is open-ended, although there are many variations. Practitioners are invited to start by simply sitting and observing their mind and body. Label thoughts as thoughts, feelings as feelings, intentions as intentions, note them - note noting them - and let them pass.

It's done wonders for four-year member John Dooley, who, when he's not working as a counselor and Prescott College professor half the year, meditates with similar groups across the country.

"It reminds me I'm not just my mind, or a collection of my thoughts," said Dooley, who began practicing 40 years ago.

He began studying eastern religions while making bombs in the Navy during the Vietnam War.

"I was very interested in the people who we were killing," Dooley said. "After that I found out about (Western Zen guru) Alan Watts, the foundations of mental health, and the dignity of people - that was pretty much it for me."

He's practiced a variety of meditation forms, but is fond of Vipassana.

"It appealed to me because it's not as rigid about physical stillness," Dooley said. "It lets me wander, if I want to, then get back to sitting."
TOP