Tulsans are getting an inside look at a 2,600-year-old religious tradition this week, as a prominent Tibetan Buddhist monk teaches and leads public meditation.

Tulsa, OK (USA) -- Khen Lobzang Tsetan, a guest of the Bodhicharya Oklahoma Buddhist Meditation Community, is head abbot of Tashi Lhunpo Monastery in exile, in India, and founder of the Siddhartha School Project in Ladakh, India. 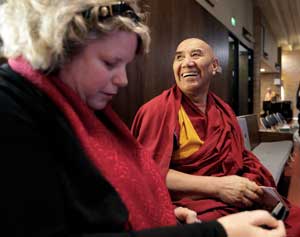 He has been speaking this week at Fellowship Congregational Church, 2900 S. Harvard Ave., where he will lead a meditation at noon Sunday. He will speak from 4 to 6 p.m. Sunday at All Souls Unitarian Church, 2952 S. Peoria Ave.

Lobzang Tsetan's parents decided at his birth in 1938 that he would be a monk and set him on that path, he said in an interview this week.

"You can leave at any time," he said, but by his teens, he was committed to that way of life and to its celibacy.

At age 16, he and his father walked 800 miles from their home in India to the Tashi Lhunpo Monastery in Tibet, a two-month journey. There, he began his studies in earnest.

The 15th century monastery was founded by the first Dalai Lama and at one time had 3,000 monks. It was the center of Tibetan Buddhist learning.

In the early 1950s, the Chinese came to Tibet with the promise that they would help modernize the nation.

Instead, they consolidated power, persecuted the monks and eventually forced the closing of the monastery. The 14th Dalai Lama, the spiritual and political leader of the Buddhist nation, fled to India, along with many of the monks, where he set up a Tibetan government in exile.

Lobzang Tsetan himself fled to India in 1957.

The Dalai Lama later asked him to be the head abbot of the Tashi Lhunpo Monastery in exile, a position he still holds.

In 1995, he established the Siddhartha School in his home town to preserve the Tibetan Buddhist culture among the children of his town and to provide them with a good education.

The children at the school, ages 4-16, begin each day with physical exercise, singing, prayer, silent meditation and a lecture on Buddhism.

The school is supported by donations and tuition from those able to pay. No one is turned away.

Jackie Roemer, Lobzang Tsetan's Tulsa host and director of Bodhicharya Oklahoma Buddhist Meditation Community, who has visited the school, said she was stunned to see 300 students sitting silently on the ground for 10 minutes during meditation.

"The meditation produces a compassion and stability that helps them academically," she said.

Buddhism is the fourth largest and one of the oldest religions in the world.

It was founded by Siddhartha Gautama, "the Buddha," in the sixth century B.C. in northern India.

It uses teaching and meditation to train adherents to eliminate harmful thought patterns and emotions, and to discover compassion and wisdom within themselves, as they move toward enlightenment.

Unlike Judaism, Christianity, Islam and Hinduism, Buddhists do not believe in a creator God who exists separate from the creation.

They do not have a creation story, like Adam and Eve in the Garden of Eden, but believe everything has existed from beginningless time.

They do not believe in original sin, or the existence of a static human soul, but believe that all humans have the seed of compassion within, and the potential to achieve enlightenment.

Buddhists believe in reincarnation, that individual humans work toward enlightenment over numerous lifetimes.

They believe those who have obtained enlightenment can remember their past lives.