Dalai Lama Speaks to a Sold Out TCC

Tucson, Arizona (USA) -- The Dalai Lama sat with his legs crossed in front of a sold-out crowd at the Tucson Convention Center Arena on Monday afternoon.  “For me, this way, more comfortable, but to some people, this style very painful," the Dalai Lama laughed as he pointed to his legs. 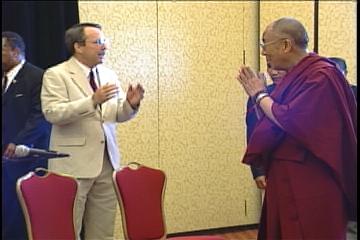 << The Dalai Lama in Tucson, Arizona

A Buddhist leader of millions, the Dalai Lama sold out the Tucson Convention Center to a crowd of different ages.

"I think a lot of kids should go and see him,” said 11 year-old Joey Garvin.

Many people were from places other than Tucson.

And they had a variety of backgrounds.

"I'm not Buddhist, but I read a fair amount,” said Bill Hoy from Bowie.

"Just compassion, he's a living embodiment of a being that's been transmitted from lifetime to lifetime,” said Antara Davis, a Buddhist from California.

But a few outside protested the attention given to the Tibetan monk.

"Well they'll be led astray to think that his teachings about peace and compassion without the foundation of the salvation from sin in Jesus Christ. There's no foundation there for peace or anything,” said a man who would not give his name as he held a sign promoting Jesus.

"One Christian minister, he introduced me as a good Christian. So, I think he found some sort of similar practice, or similar concept or spirit,” said the Dalai Lama.

Inside the Convention Center, the Dalai Lama emphasized the need for everyone to balance their emotions, and show compassion, no matter what religion they practice, or if they even have one.

"Genuine peace must be achieved through inner peace,” the Dalai Lama said.

That universal advice was available for those who chose to accept it.

"I think the key to change of society, and the change of the world, starts from the individual, from here. That's all, thank you,” the Dalai Lama said to the crowd.

The Dalai Lama will be in Austin, Texas on Tuesday.