TUCSON, Ariz. (USA) -- His Holiness the Dalai Lama met with O'odham from the border region, connected in hearts and spirits through the bonds of exile and oppression by the governments of the world, O'odham said. 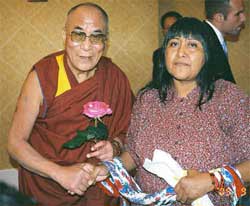 << Photo courtesy Ofelia Rivas -- the Dalai Lama met with "O'odham Voice Against the Wall" founder Ofelia Rivas and other members of the O'odham communities while in Tucson in September to speak on "Creating Peace in a Violent World."

Encouraging warm-heartedness and compassion in a region where border crossers are harassed, arrested or die of thirst in the desert, the Dalai Lama spoke on ''Creating Peace in a Violent World.''

During his visit to Tucson in September, the Dalai Lama met with O'odham, including Ofelia Rivas, founder of ''O'odham Voice Against the Wall,'' a community group opposing a border wall which would dissect traditional O'odham communities in the United States and Mexico.

Rivas said the Dalai Lama's presence would have a lasting benefit for her tribe.

''His Holiness came out through the security personnel smiling and extending his hand to touch and bless the O'odham children. His Holiness listened to greeting words in O'odham and accepted a special gift and a single flower from one of the children.''

After meeting with the children, the Dalai Lama embraced Rivas and shared a message with her.

''Our lives and our children's lives are forever changed,'' Rivas said.

''We experienced the struggle and the peace of the life of His Holiness, which is the same struggle and effort of the O'odham living on the borders of the United States/Mexico international boundary.

''We experienced His Holiness as the living light and the living presence of peace.''

Meanwhile, John Halpern, Buddhist and filmmaker from New York, has produced the film ''Refuge'' with Martin Scorsese and Oliver Stone, on the everyday life of the Dalai Lama.

''John came to O'odham territory to film the existence of the wall,'' Rivas said. Filmmakers interviewed O'odham along the international border and filmed construction of the ''wall'' that is under way along the border of Arizona.

''Refuge'' was slated for a West Coast premiere at the Century City (Calif.) Film Festival in the last week of October.

Comparing the Dalai Lama's struggle to the indigenous who are on the border, Rivas said that in 1959, the Dalai Lama was forced into exile in India after the Chinese military occupied Tibet. He has resided since that time in Dharamsala, northern India, seat of the Tibetan government in exile.

Rivas said the U.S./Mexico international border as established in the Treaty of Guadalupe and, in 1853, the Gadsden Purchase, dissected the territory of the O'odham.

Today, O'odham live on both sides of the international border. However, she said many O'odham live in exile from their original birthplaces.

Rivas said the U.S. government's ''wall'' project is intended to permanently seal the entire international border of the United States and Mexico, as documented in a 350-page report released by the Department of Homeland Security in 2002.

Currently, there is increased militarization of the United States border, the northern O'odham territory, and increased danger to the remaining traditional O'odham using ancestral routes.

''The O'odham are harassed and held at gunpoint during interrogations, as well as killed by the Border Patrol military,'' she said.

Referring to the traditional route across the border, she said, ''The traditional O'odham, since the time of creation, have held ceremonies and used ancestral routes to visit sacred holy places and visit families.''