Looking to be a little more cool, calm and collective?

SUNBURY, Arizona (USA) --  Here’s what it’s not. It isn’t Satanism. It’s not a form of worship. It doesn’t come with a system of rules and rewards. 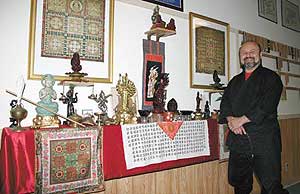 << ON THE PATH TO ENLIGHTENMENT — Jeffrey Miller of Warrior Concepts International, Sunbury, has studied Buddhism for 25 years. He’s offering a 10-week introduction to the practice beginning Sunday. Photo by Pam Dailey/Standard Journal.

These misconceptions of Buddhist practice are some of the reasons Jeffrey Miller has held off on offering a course on the subject. He’d been considering it since the early 1990s, but wasn’t sure if there would be enough local interest.

“One of the purposes of the course is to provide information for people who want to be informed,” he said.

Miller, owner of Warrior Concepts International in Sunbury, said people looking for an alternative way to live usually find themselves attracted to the basic principles of Buddhism. Miller said he can help guide them, but the class is also for anyone who simply wants information.

He plans to provide an introduction to basic Buddhist study and practice, but don’t expect to achieve enlightenment in 10 weeks

“Buddhism isn’t a quick fix,” Miller said. “We’re talking about a philosophy that’s been around for well over 2,500 years.”

He believes a foundation in Buddhism is probably most beneficial for “people looking to gain more confidence, control and power over their life.” He added, “But that has to be balanced with an open mind.”

Miller also acknowledges that intense self-reflection isn’t for everyone. A person who needs an external source for validation or comfort probably won’t have much use for the practice, he said.

The Western school of Buddhism rests on authenticity and personal responsibility, Miller said. It’s applicable in everyday life, and it’s not concerned with what happens after life.

For many people, applying some of the Buddhist principles to their lives is a way to relax and let go of stress, Miller said.

“People will get a chance to take a look at how they operate as individuals, how to take control of negative situations. They’re going to learn how to do this without trying to please other people, without trying to fit in, without doing it for reward or benefit,” Miller said.

“The byproduct of understanding this practice is that you become a calmer, more collected person.”

His initial involvement with Buddhism was the product of a “leap of curiosity.” He learned about the practice while studying martial arts at a time when, he admits, he had a bit of a short fuse.

That was 25 years ago. Miller has since studied with Buddhist spiritual leaders in Japan to become a “Buccho,” or Buddhist lay teacher.

Today his calm demeanor can be frustrating to some people, his unwavering values puzzling at times. But that doesn’t bother him.

“Buddhism is really about morals and ethics and how we create our own experiences,” Miller said. “One of the biggest things is getting the ego in check, and that doesn’t mean becoming subservient or losing yourself in the group.

“A Buddha is simply an enlightened human being — it’s not this divine substitute for God.”

The cost for the 10-week course is $150 and includes seven workbooks, authored by Miller, and step-by-step instruction. Classes begin at 1 p.m. Sunday at Warrior Concepts International, 362 Market St., Sunbury.